Princeton Mayor Liz Lempert and the Princeton Police Department are holding a news conference with the Greater Mercer Transportation Management Association (GMTMA) Thursday, September 29 to kick off its participation in Street Smart New Jersey, a pedestrian safety initiative focusing on outreach and education designed to change unsafe behavior by pedestrians and drivers on our streets. 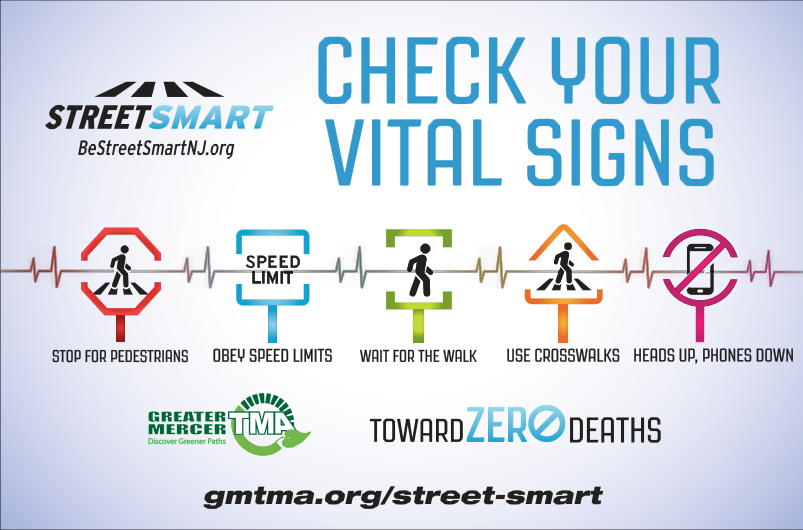 The event is being held at Hinds Plaza at the intersection of Witherspoon and Hullfish Streets during the Princeton Farmers Market at 12:30pm.

The Street Smart Campaign is launching in early October to coincide with the start of local schools and the return of Princeton University students for the fall semester.  The campaign focuses on compliance of traffic and pedestrian safety laws.  The Princeton Police Department is partnering with GMTMA, a non-profit transportation organization serving Mercer County.

“We want everyone to be safe whether they’re walking to school, to work, to the store, or out for some exercise,” said Mayor Lempert. “Princeton has lots of pedestrians because we’re a great, walkable community, and that’s why this safety campaign is so important. It’s an opportunity to remind both pedestrians and drivers of the rules that are designed to keep everyone safe.”

Street Smart aims to change pedestrian and motorist behavior to reduce pedestrian-related crashes, injuries, and fatalities.  The campaign uses the slogan “check your vital signs” to remind motorists and pedestrians of safe travel roles and responsibilities.  Vital signs are displayed on tip cards, posters, and temporary street signs throughout the community as a visual reminder for drivers and pedestrians.

For more information on GMTMA and the Street Smart campaign in other municipalities, go to gmtma.org/street-smart.