It would be nice if fewer traffic fatalities was the silver lining to the Covid Pandemic, at least partially offsetting the over twelve thousand New Jerseyans who have succumbed to the virus. But no – traffic fatalities are on par with last year, despite drastic drops in traffic volume for the past 13 weeks.

New Jersey’s drop in traffic volume is among the steepest in the nation, averaging 53% of the volume of the last week in February 2020, according to INRIX, a traffic data intelligence provider. Yet fatalities are only down by eight people compared to the same day last year (221 vs 229), according to the New Jersey State Police. 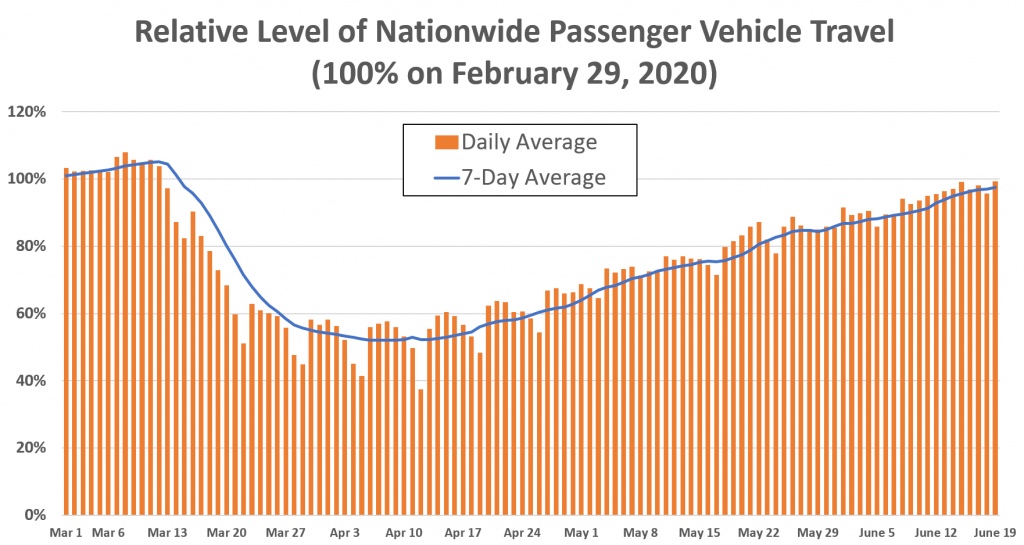 Traffic safety has traditionally been measured by fatalities per vehicle miles traveled (VMT), but our Covid-era natural experiment shows that fatalities are in fact unrelated to VMT – what’s going on? The explanation depends on your traffic safety paradigm, which is changing from the traditional view, focused on reducing the total number of crashes, to Vision Zero, focused on eliminating all fatalities and serious injuries.

The traditional safety paradigm (Trad) focuses on the vagaries of user behavior and law enforcement, holding that the road design and traffic laws are perfect. In this view, the reduction in total crashes is primary and crash severity is secondary, so the lack of a relationship between VMT and fatalities is unremarkable, as long as the total number of crashes is reduced (which we don’t have data for at this time).

The new Vision Zero paradigm (VZ) focuses on eliminating fatalities and serious injuries, even if total crashes increase, and include road design and traffic laws in the analysis, especially as they relate to travel speed, which directly affects crash severity and likelihood. The Vision Zero paradigm would not focus on the fatality rate per VMT, just the absolute number of fatalities.

So Trad would explain the Covid results in terms of speeding, impaired and distracted drivers, and focus on changing driver behaviors. VZ would point out that high speed and volume roads (arterials) are where the fatalities and serious injuries take place, by design.  Vision Zero doesn’t excuse willful non-compliance by drivers; however current roads are designed to comfortably allow for driving at higher speeds than posted.

Trad might want to increase enforcement, while VZ would want roads to be designed to largely self-enforce by making it uncomfortable to speed, and add automated enforcement (like cameras) for certainty and equity.

Both would agree that vehicle safety technology that limits speed, detects pedestrians and bicyclists, and prevents impaired driving should be mandated for all vehicles.

Other countries (and US cities) have seen dramatic drops in traffic fatalities by implementing Vision Zero programs, and the US would have 20,000 fewer fatalities every single year, if we implemented VZ nationwide. Will we?