Getting more people out of their cars and onto their feet is a complicated undertaking. You have to grapple with road design, sidewalk maintenance, peoples’ affection for their cars, weather, safety concerns, physical fitness (or lack thereof), and preconceived bias against walking…just to name a few.

But what about just basic lack of information and awareness? Would behavior change, at least a little, if people just had more information? One man in Raleigh, North Carolina, set out to find out just that. An urban planning student, Matt Tomasulo, installed 27 signs at three intersections in central Raleigh last month, with help from friends. People can scan the high-tech signs with their smartphones and get a customized walking route on Google Maps.

The unsanctioned “guerrilla” campaign, dubbed Walk Raleigh, has caught the attention of city officials and pedestrians alike. Walk Raleigh aims to introduce small-scale civic and social interventions to improve quality of life in the area. Their guerrilla wayfinding system of 27 signs at three intersections in town are intended to put walkability at the forefront of conversation about the future of downtown Raleigh and force people to reconsider how they get around by re-educating the public about its transportation choices.

Tomasulo’s project is getting international attention. BBC News recently visited Raleigh to shoot a story about his signs — you can watch the video here.

Tomasulo’s company, cityfabric, has worked to engage people with their surroundings before, by using city maps as fodder for clothing and décor. He’s also just undertaken a project in New York called North Is That Way, involving signs pointing north. These kinds of projects could go a long way to remind people where they are, where they’re going, and that walking is an option they might have overlooked.

On the Move readers, where in our region would you like to see signs like these? Are there any intersections where a similar sign campaign could be useful in getting people to walk more, or to at least think about walking more? 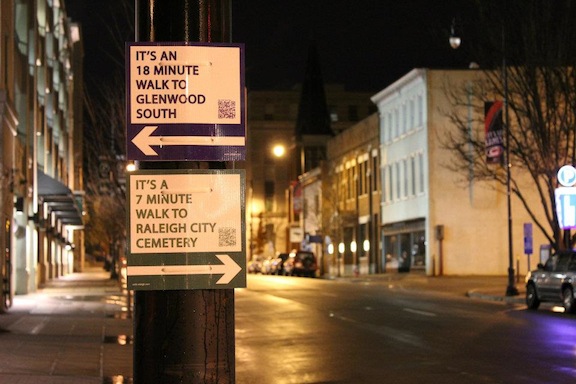