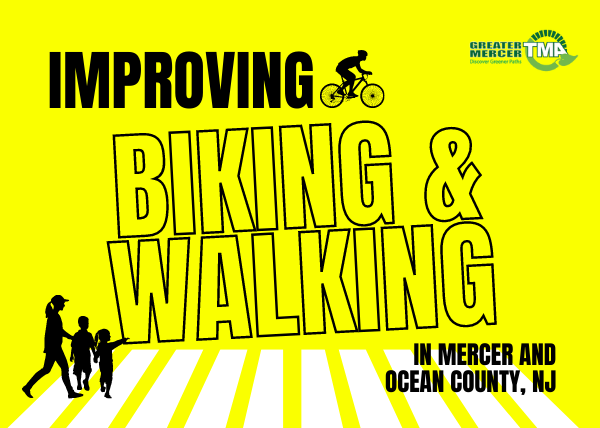 Improving Biking and Walking in Mercer County and Ocean County

In 2017, 53% of Americans reported they would prefer to live in a walkable, bikeable neighborhoods than one with larger properties, but only eight percent of people in America live in walkable neighborhoods. Right now, many countries all over the world are experiencing record-breaking surges in the price of gas, sparking some intense conversations about gaps in our built environment that we often don’t think about. Some people have taken this opportunity to speak about how we can all benefit from re-shaping our communities to support more walking, biking, and public transit.

@lj_sam_ on Twitter: people should be less mad about gas prices and more mad that they can’t live in their cities without relying on cars

@yitgordon on Twitter: “Reducing public transit fares, increasing bus service & creating temporary street improvements for transit & biking that give people alternatives to driving could ensure more people don’t have to rely on cars to get around.”

“Reducing public transit fares, increasing bus service & creating temporary street improvements for transit & biking that give people alternatives to driving could ensure more people don’t have to rely on cars to get around.” 🚍 @yfreemark @urbaninstitutehttps://t.co/RmrGvnpYib

Complete Streets have transformed so many communities in New Jersey. Here are a few notable projects in Mercer and Ocean County to illustrate the broad range of strategies that people have used to promote Complete Streets and improve biking and walking in their communities: 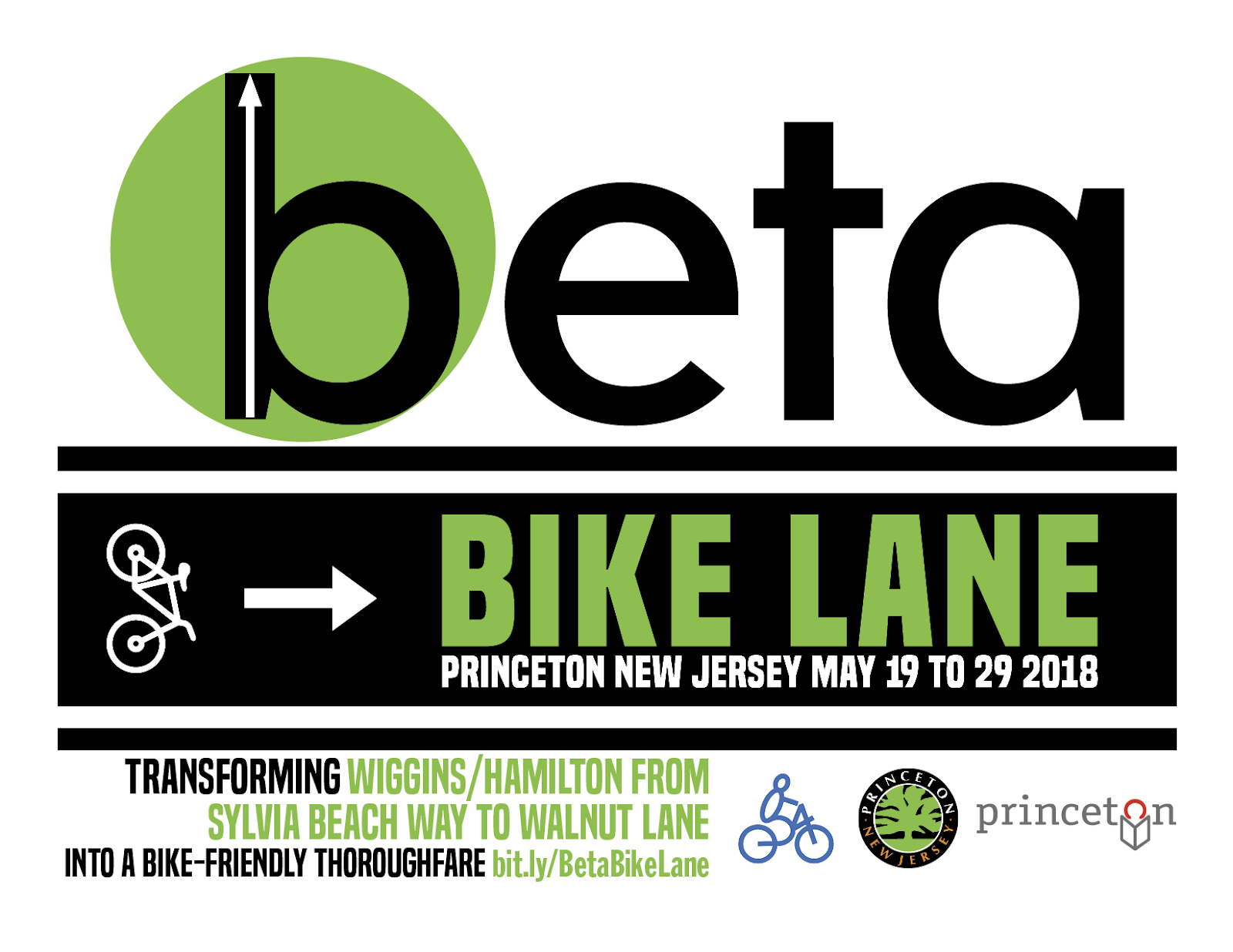 Princeton is known for being one of the best places to cycle and be a cyclist in New Jersey. Since adopting a Complete Streets Resolution in 2019 and again in 2021, advocates have been hard at work to improve bike and pedestrian infrastructure especially in their busy downtown area.

In 2018, volunteers set up Beta Bike Lane, an experimental initiative that removed street parking to accommodate more bike lanes and encouraging bicycle use in town. The temporary experiment was installed along Wiggins Street and Hamilton Avenue between the Princeton Public Library and Walnut Lane for 10 days in the summer, and received positive feedback! According to a survey conducted after the experiment, removing parked cars increased visibility and safety for cyclists, making them feel “seen and welcomed” in the community. Bike culture continues to flourish here as the Princeton Bicycle Advisory Committee (PBAC) works with city council to maintain and develop Princeton Bike Boulevards, a network of roads and paths that connects the community and creates a greenway with a variety of cycling loops around town. 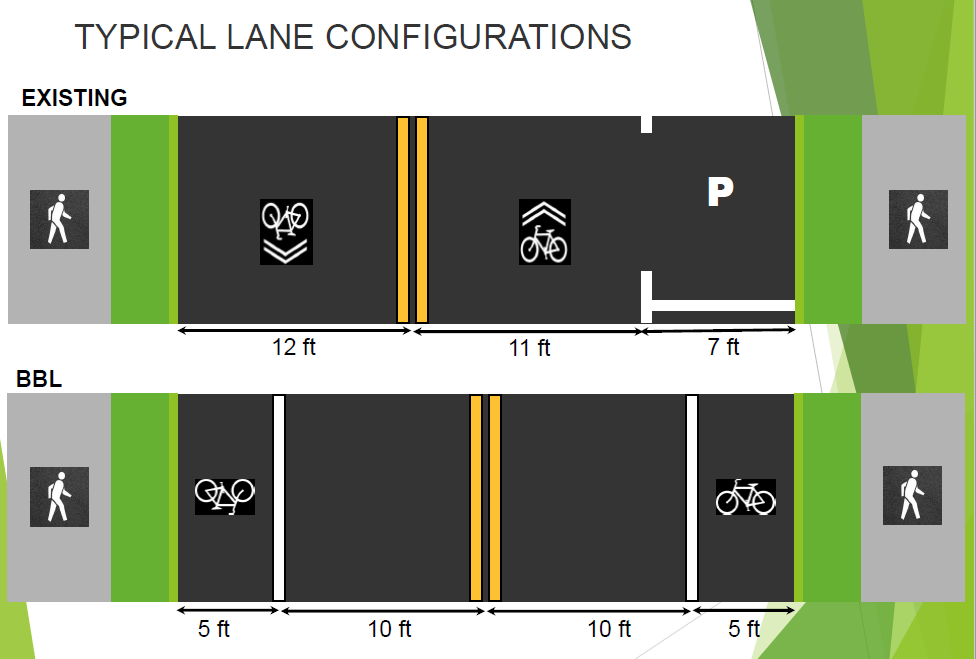 In 2019, The New Jersey Department of Transportation agreed to fund a two-week pilot program that enabled pedestrians to push a button on the traffic signal pole, stopping traffic in all four directions at a key Nassau Street intersection and allowing people to cross from any direction, even diagonally. Right-turn on red movements for cars were also banned at the intersection. The initiative was received positively by residents and locals, but an application to make the change permanent was denied by the New Jersey Department of Transportation in 2019. Princeton has been pushing for the traffic signal modification – called a pedestrian all-cross – for a decade, and appealed to NJDOT for reconsideration. The appeal was granted and the pedestrian all-cross signal was eventually made permanent. Recently, in a letter to the Editor of Town Topics, a resident called for the installation of the system at all Princeton intersections.

In 2020, Princeton received a $674,071 grant from NJ DOT through the Safe Routes to School program to replace 40-year old traffic signals on two key intersections on N. Harrison Street, 1) Hamilton Avenue and 2) Franklin Avenue. The new signals will allow pedestrians and bicyclists to push a button to change the traffic signal so they can cross the street. The two intersections are used by school children to reach the Princeton Charter School on Ewing Street, and Princeton High School on Moore Street and the John Witherspoon Middle School on Walnut Lane.

Princeton continues to look for more ways to improve pedestrian and bicycling access in their community. They recently worked with WSP, a transportation consulting firm, to conduct a multi-modal corridor study for Paul Robeson-Wiggins-Hamilton area that explored the installation of standard bike lanes on both sides of the street without a buffer. The study also recommended traffic calming measures such as traffic circles, raised pedestrian crossings, and installation of traffic signals at various locations on the corridor to reduce speed and volume of traffic and improve traffic safety for all roadway users. 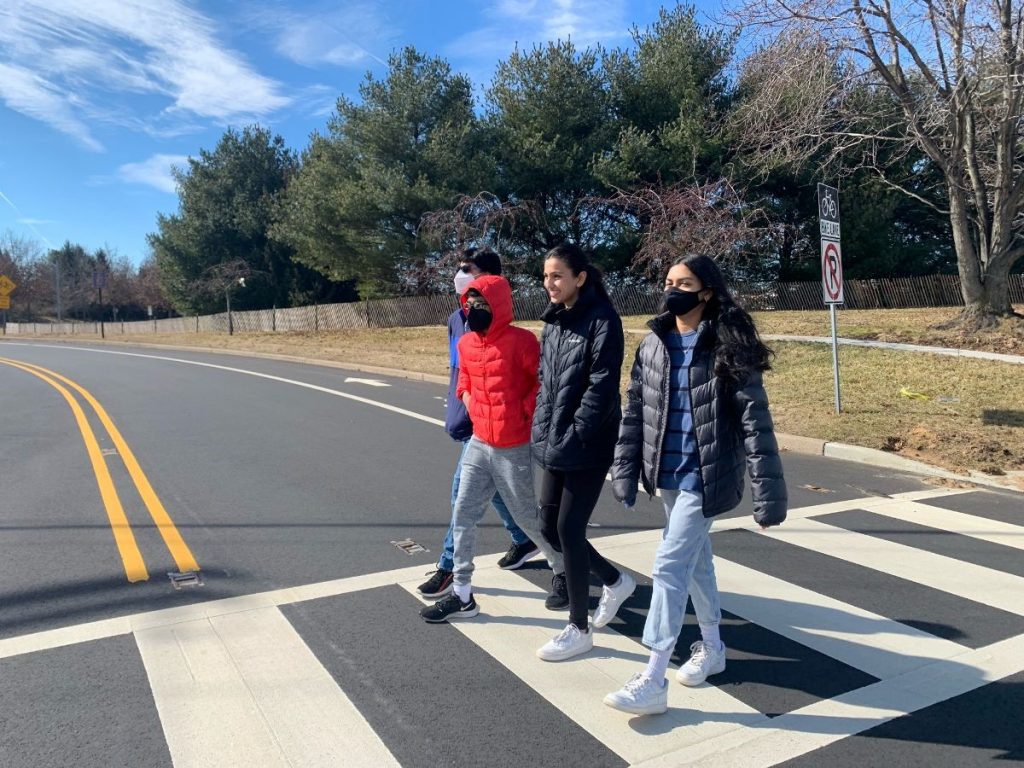 In 2021, West Windsor Township completed the Southfield Road Reconstruction project and the Alexander ADA Improvement project. Details about each respective project are below:

Southfield Road Reconstruction project: This project included mill and resurfacing of Southfield from New Village Road to Stonewall Drive and replacement of sidewalk approaches and ramps to meet ADA requirements. The township worked with West Windsor Bicycle and Pedestrian Alliance (WWBPA), Greater Mercer TMA. and students from Grover Middle School and Village Elementary school to boost safety at the two crosswalks on Southfield Road, namely at New Village Road and Village Road East. According to the WWBPAC, the students were motivated by friends who told them about the challenges of walking and biking to school as well as a 12-year-old boy who was hit by a motorist in 2017 while biking to summer camp at Grover. The town also installed solar-powered rapid-flashing lights above a yellow pedestrian crossing sign that are activated by the touch of a button, to remind drivers to slow down for pedestrians.

Alexander ADA Improvements: The township also milled and resurfaced a part of Alexander Road from Wallace Road to Harris Road (near the Princeton Junction train station, where we see high pedestrian and cyclist traffic). They also made improvements to meet ADA requirements such as the replacement of several sidewalk approaches and curb ramps. At the intersection with Berrien (a T-intersection) the township installed a brick print sidewalk crossing and a pedestrian actuated rectangular rapid flash beacon system (RRFB) will be installed later this year. At the intersection of Alexander and Scott (where the WW Arts Center is located), the township made improvements to a raised intersection and crosswalks to enhance the visibility of the intersection and pedestrians, as well as improve ADA accessibility. Both intersections are less than a 1/3rd of a mile (approx. 1,600 feet) from the Maurice Hawk School campus. This may positively impact the safety of students who are walking to and from the school.

The Borough of Point Pleasant is making improvements to its sidewalk design on the north side of Herberstville Road from Route 88 to Maxson Avenue and on the east side of Maxson Avenue from Herbertsville Road to River Road. According to a January 2022 press release from Mayor Robert A. Sabosik, the design will include new curbing, handicapped ramps with truncated domes at each intersection as well as pavement restoration. This project will make it safer for people who cross Route 88 to get to Riverfront Park and connect the crossing from Route 88 to Herberstville and Maxson and the park and beach. Construction is expected to complete by the Fall of 2022 at the latest.

In the recent years, the Mayor and the Borough have prioritized increasing pedestrian safety and putting in sidewalks throughout the borough. They also improved sidewalks around Nellie Bennet Elementary School, up and down Bridge Avenue and Beaver Damn Road, as well as increasing street safety around Point Pleasant Middle and High Schools.
To do this, the borough created the first ever Pedestrian Safety Fund in the borough’s history and increased the capital budget for street improvement and pedestrian safety projects.

Mayor Robert A. Sabosik said in another press release in February 2022: “ The Council and I have been eyeing this area for a while now. It’s taken a little bit of work, from planning to funding, but we finally approved the project at our February Council Meeting. This project will put in sidewalks on the East Side of School Street from Moore Avenue to Whittier Drive. For too long students, parents and residents alike have had to walk on a makeshift dirt path or in the middle of the street traversing this heavily trafficked road. This unsafe condition is compounded on days and nights when there are school functions or athletic events on the football field and accompanying baseball and softball fields. Our professionals have met several times with school officials to make this a possibility and thanks to all parties working together, we can add this to our list of accomplished projects.”

We love to see more and more communities prioritizing safer streets for pedestrians and cyclists. What do you think? Let us know if we missed anything or if you want to share about bikeped related improvements in your community!