Findings from a new report by the Alliance for Biking & Walking are bound to make bikers and walkers all warm and fuzzy inside. The report, Bicycling and Walking in the US: 2012 Benchmarking Report, finds that more people are biking and walking in recent years. The report culls its numbers from over a dozen government sources and city and state surveys and is chock-full of evidence of the benefits of biking and walking as well as the importance of funding infrastructure to encourage more people-powered transportation. 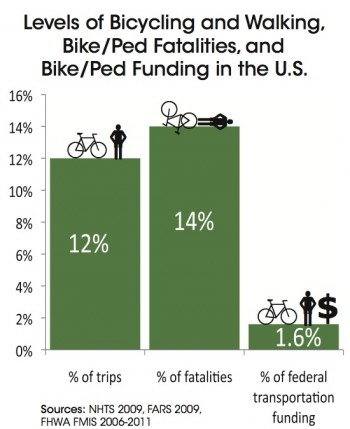 While biking and walking make up 12 percent of all trips in the U.S., they receive only 1.6 percent of federal transportation funding, according to the report. But Americans — particularly young ones — are getting tired of sitting on roads in traffic. Biking and walking numbers are up, and no doubt this spring’s rising gas prices can help increase those numbers. Nationwide, the number of people who bike to work is up 57 percent since 2000. It’s still a tiny fraction — 0.6 percent — of all commuters, but it’s still a big increase from where we were ten years ago.

The report also points out that 40 percent of all trips in the U.S. are less than 2 miles. That’s an easily bikeable distance, especially if our roads were made a little more bike-friendly so cyclists felt safer.

The Alliance’s report details the way walking and cycling becomes more popular: More cyclists and pedestrians let governments know that those modes of transportation are popular and deserve more attention. Then, the improved infrastructure encourages more people to bike and walk. The cycle continues. This is why the cities with the most biking facilities (Portland, San Francisco, Minneapolis, New York, and Seattle) generally rank high for biking and walking levels. Places at the bottom of the rankings, like Fort Worth, Dallas, and Jacksonville, have little infrastructure.

The report’s findings on cyclist and pedestrian fatality rates are also of interest. Counter to what one might believe, as the percentage of people who walk and bike goes up, fatality rates actually go down — not up. Oregon, for example, the state with the highest percentage of people biking to work, reports only 1.4 bicycling fatalities per 10,000 daily cyclists, while Mississippi, in the bottom five for bike commuting levels, reports 14.1 fatalities per 10,000 daily cyclists — the highest of any state. Five of the 10 safest cities for cycling are also in the top 10 for rates of bike commuting. The same pattern applies to pedestrian safety: seven of the 10 safest cities for pedestrians also rank in the top 10 for levels of walking to work. The least safe place to walk, Fort Worth, also comes in last for pedestrian commuting.

This makes sense. If it’s safe to walk or bike to work, you’re more likely to do it. But if you feel unsafe walking or biking, if the design of the road doesn’t feel welcoming or pleasant or safe, you’re going to get into your car. Furthermore, the report also suggests that in places where walking and biking are common, walking and biking are safer simply because drivers are used to sharing the road.

The report identifies some things besides infrastructure that influence biking and walking. Density is one: if most of your daily destinations are within a few square miles and parking is limited, you’re much more likely to walk. This explains why people living in large U.S. cities are almost twice as likely to walk or bike to work than the national average. But density isn’t the only factor — the list of the top 10 biking/walking states also includes several non-urban states, including Alaska, Montana, South Dakota, Wyoming, and Maine. 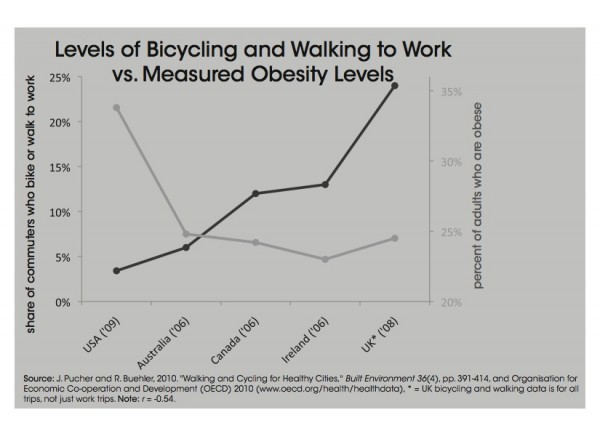 Finally, the report looks at numerous measures to promote bicycling and walking, and concludes that a variety of policy measures and provisions are likely needed to make communities more bicycle- and pedestrian-friendly. Obviously, greater investment in bicycling and walking is the primary recommendation of this report, although it also recommends numerous other measures that must be taken to simultaneously strengthen public policy, infrastructure, and behavior toward bicycling and walking, including complete streets policies, which require that roadways be designed and built with all users in mind. In the absence of a national complete streets policy, the Alliance encourages states and jurisdictions to pursue local policies to begin to transform their local transportation culture and guarantee access for all road users. New Jersey happens to be one of the states that does have a state-wide Complete Streets policy. 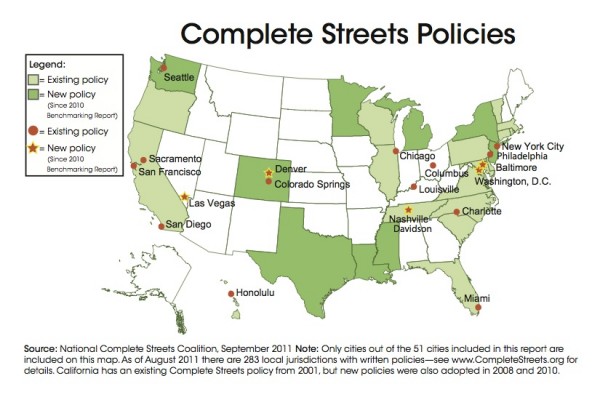 Other policies featured in this report, such as education for police officers, the inclusion of bicycling and walking safety in driver education, adult and youth education programs, public awareness campaigns such as “Share the Road,” and other promotional efforts, are also recommended as tools to help raise awareness and change attitudes around bicycling and walking.