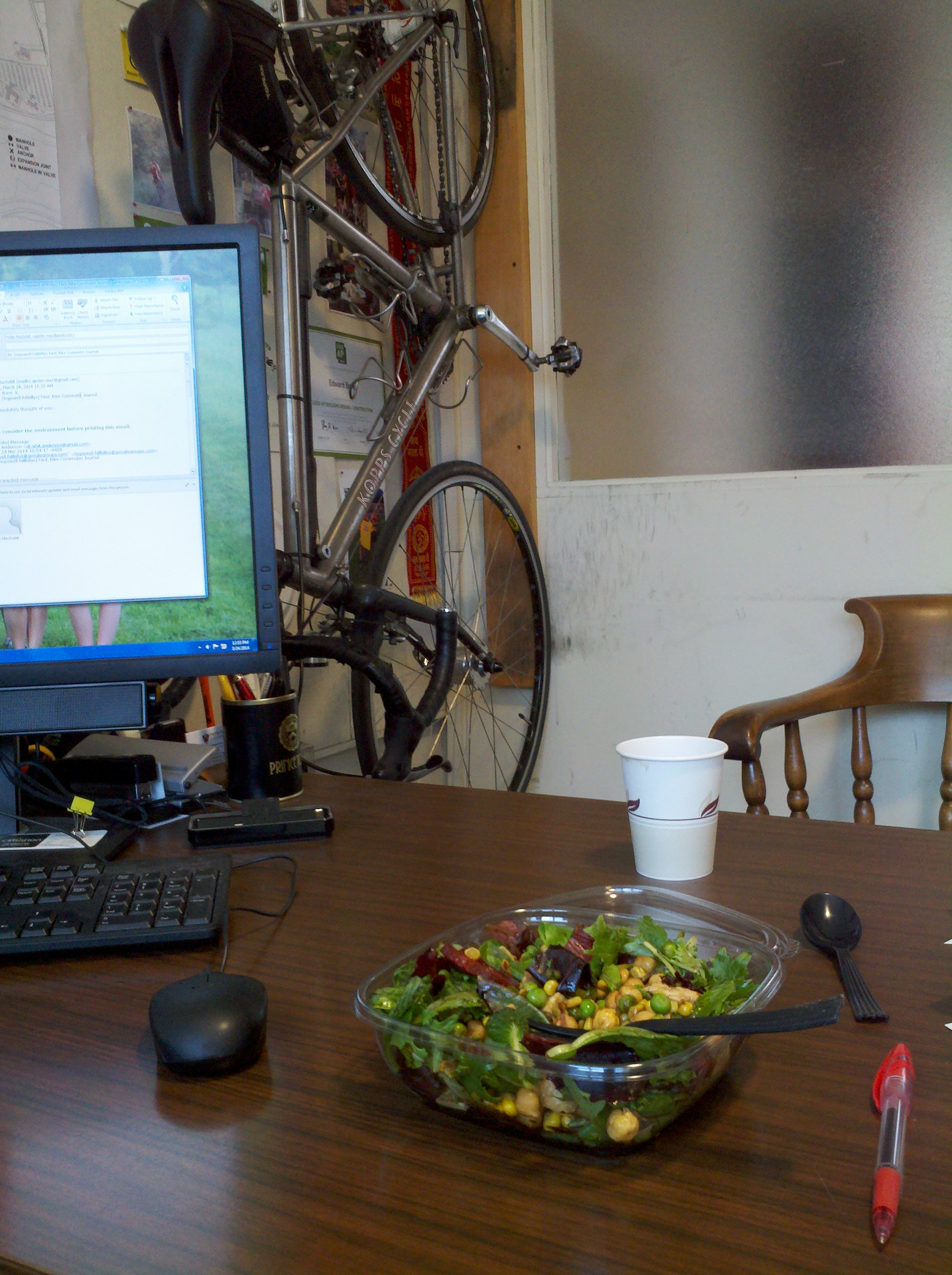 2014 marks my 30th year of commuting by bike. At this point bicycle commuting isn’t just a passing phase, it’s part of what defines who I am.

For the first year out of college I didn’t own a car. Living in West Philly, cycling was faster and cheaper than any other way I could get to my job in Center City.  Back then I’d wear my shirt and dress pants and carry my suit jacket and tie in a backpack. I could park outside the building entrance, while most of my co-workers had to walk several blocks from lots where they’d paid to park.  I kept a massive chain and lock locked around the bike rack directly outside our office building so I didn’t need to carry it back and forth, and the building security officers could see the bike.  I only had a few miles to ride, so washing up in a men’s room was all I needed. Without spending my income on car payments, insurance, maintenance, parking, or gas, I was able to save enough for a down payment on a house much sooner than my peers.

When I got a work assignment in Phoenixville, I moved to Devon and regularly bicycled through Valley Forge park to get to work. That was 12 miles and fairly hilly. So I didn’t do it every day. After my wife and I moved to Media, PA, I was able to find a bike trail that took me to the plant where I worked in Eddystone for a few years.

I was mostly a warm weather commuter until I got a job in Princeton and we moved to Pennington. After commuting by bicycle for a decade, I realized that it was a pretty high priority in my life. So I drew a nine mile radius around my new office and told the realtor we’d only consider looking at houses within that circle — and she needn’t bother showing us anything that involved crossing Route One.

Year by year I’ve sorted out what it took to ride comfortably in any weather. I ride 12 months a year but avoid the road when there’s a risk of ice or snow cover. My lifetime bike odometer should pass 85,000 miles this year. I expect to pass 100,000 miles before I retire. Not all of those miles were commuting. I’ve done fifty or sixty century rides, earned a Super-Randonneur award along the way. I’ve done some other ultra-distance riding, some very fast “training” rides with triathletes and solo,  and dozens of bicycle camping trips with my children.

We live in a pretty neighborhood with more property and a larger house than we could afford in Princeton. I enjoy a few miles of rural riding past cows and sheep, then a few miles of county routes that have steady, 45 mph traffic but great wide shoulders, then a few miles of urban traffic in downtown Princeton. It’s a wonderful mix. My 7 ½  mile ride takes 35 minutes at a natural pace. I carry books, phone, and clothes in panniers and shower when I arrive.  The fastest I’ve ever done the ride was 25 minutes home-bound — just after my wife told me she’d started labor with our second child! He’s now deciding on which college to attend.

As our kids grow up, my wife and I are beginning to do more and more riding together and anticipate seeing foreign countries by bike in retirement. But we have four college educations to pay for, so I expect to be bicycle commuting to work for at least another decade!