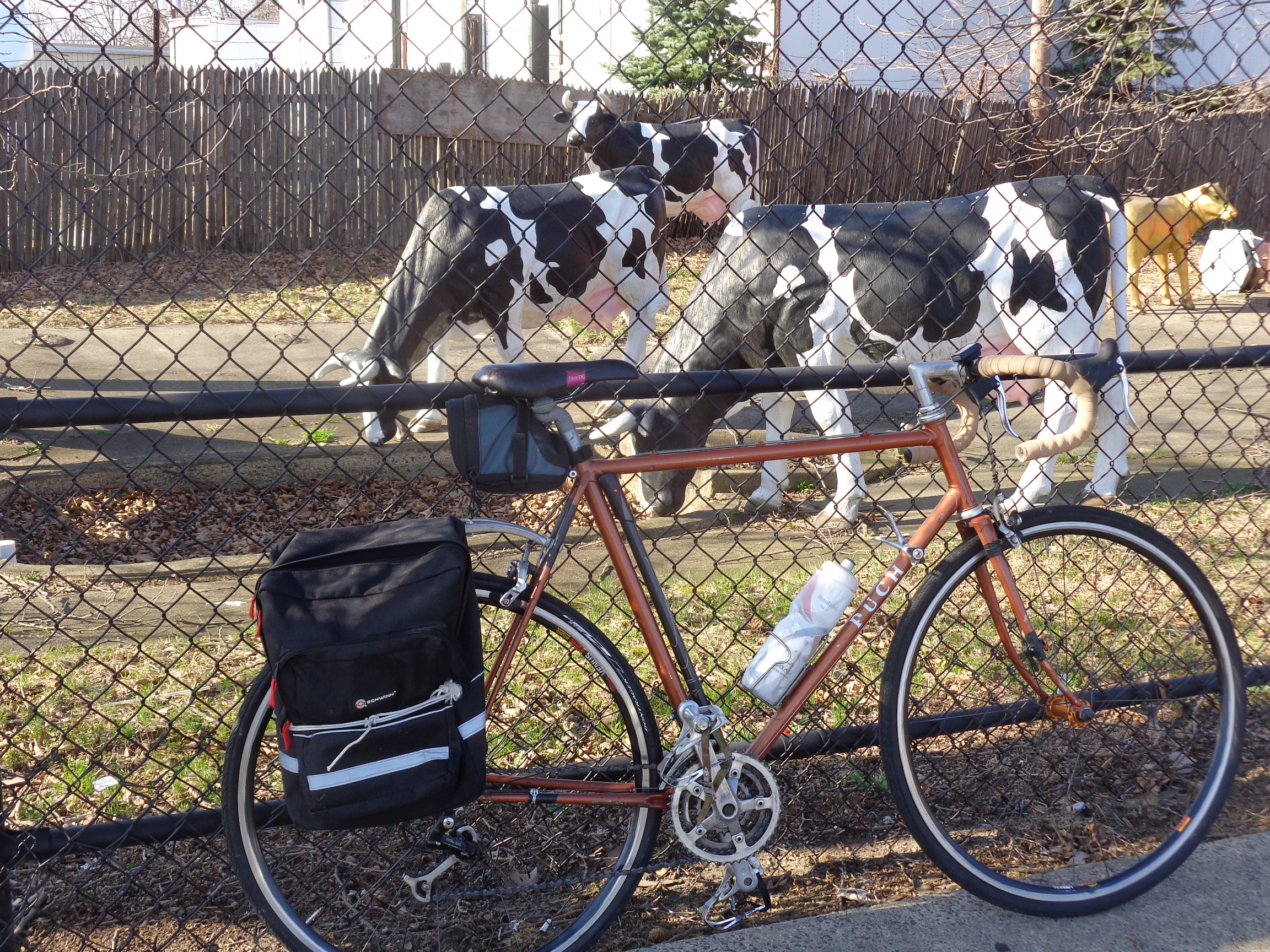 OK, after the long, long, winter, it’s going to be 60 degrees and no rain, I picked up my son’s friend and dropped them both off at school, the 606 bus leaves at 8:12, so I have 15 minutes to get my bike shorts, t-shirt, bike shoes, helmet and gloves and get over to the bus stop. You see I am somewhat of a wimp. I don’t ride when it’s cold (and this morning it’s 35 degrees), in the rain, or in the snow.

I made it. The bike goes on the front of the NJ Transit bus in a really cool, super-easy-to-maneuver bike rack. While I have a few panic attacks as we go over some wicked potholes, hoping my bike won’t get thrown off the rack and smashed by the bus, my stop comes up with everything still intact. My work is about a ½ mile from the stop, so I bike over looking like a dork with my jeans tucked into my white socks.

My bike is a steel 1980 Reynolds 531 double-butted Puch that has Campanolo pedals with toe straps with over 10,000 miles on it. (Though truth be told, I don’t even tighten up the toe straps, nor have cleats anymore.) Talk about retro. The fork was also 531 but was crushed when I flipped over the hood of a car pulling out of the Hightstown McDonalds in 1993. We got it fixed and painted by Andreas Cuevas (that might mean something to somebody out there). And it has beautiful lugs.

Work is finally over and I set out on my first ride of the season, April 1. I have a great commute from Ewing to Princeton on the Princeton Pike, which has a great shoulder almost the whole way. Not too long and not too short, about 11 miles one way. The only bad part is fighting for position on the bridge over Stony Brook. Pretty hairy. Yeah, I know, there is a separate bike lane you can ride on, but between the frost heaves and the mud and gravel at the bottom of a turn coming off the bridge, I’d rather take my chances. The first ride home of the season is so pleasant. First I pass Halo Farms with its plastic herd of dairy cows. No joke, you should go see them. Through the parking lot of the Trenton’s Farmer’s Market, dodging a thousand pieces of glass, past the “Win, Place, and Smoke” shop, then on to the open road.

I thought I would feel worse than this for the first ride of the season. A previous blogger (and neighbor of mine) says NJ is like Holland, nice and flat. Well, that’s true I guess, but not on your first ride of the season, especially up the hill into Princeton past the Battlefield Park. Coming into town is my favorite part of bike commuting – being passed by some cars in a hurry and then proceeding to pass them back while they wait in traffic at a stop sign or light. And now that Nassau Street has sharrows, I feel so legit giving myself enough room so I don’t get slammed by a car door opening up. I make it home in one piece (again). And tomorrow looks like it will be nice for another ride home.

Jenny Goodman has been bike commuting off and on (on nice days) for about 25 years. She is entitled to be a wimp, having ridden with her husband across North America, from Alaska to Montana, from Portugal to Switzerland, Maine to New Brunswick, and from NJ to Canada twice in the wind, snow, sleet, rain, blazing sun, and bugs (including a swarm of huge grasshoppers in Saskatchewan).