Aaron is an REI Princeton Employee and he bike commutes very often. One of his colleagues told us that he “bikes more often than anyone I know, in all kinds of weather.” So we decided to ask Aaron to tell what his secret is and he kindly agreed to. From tips on how to be prepared and ride safely, to his nature encounters and racing with a blue heron, he has a lot to say. Here is Aaron’s bike commuting story: 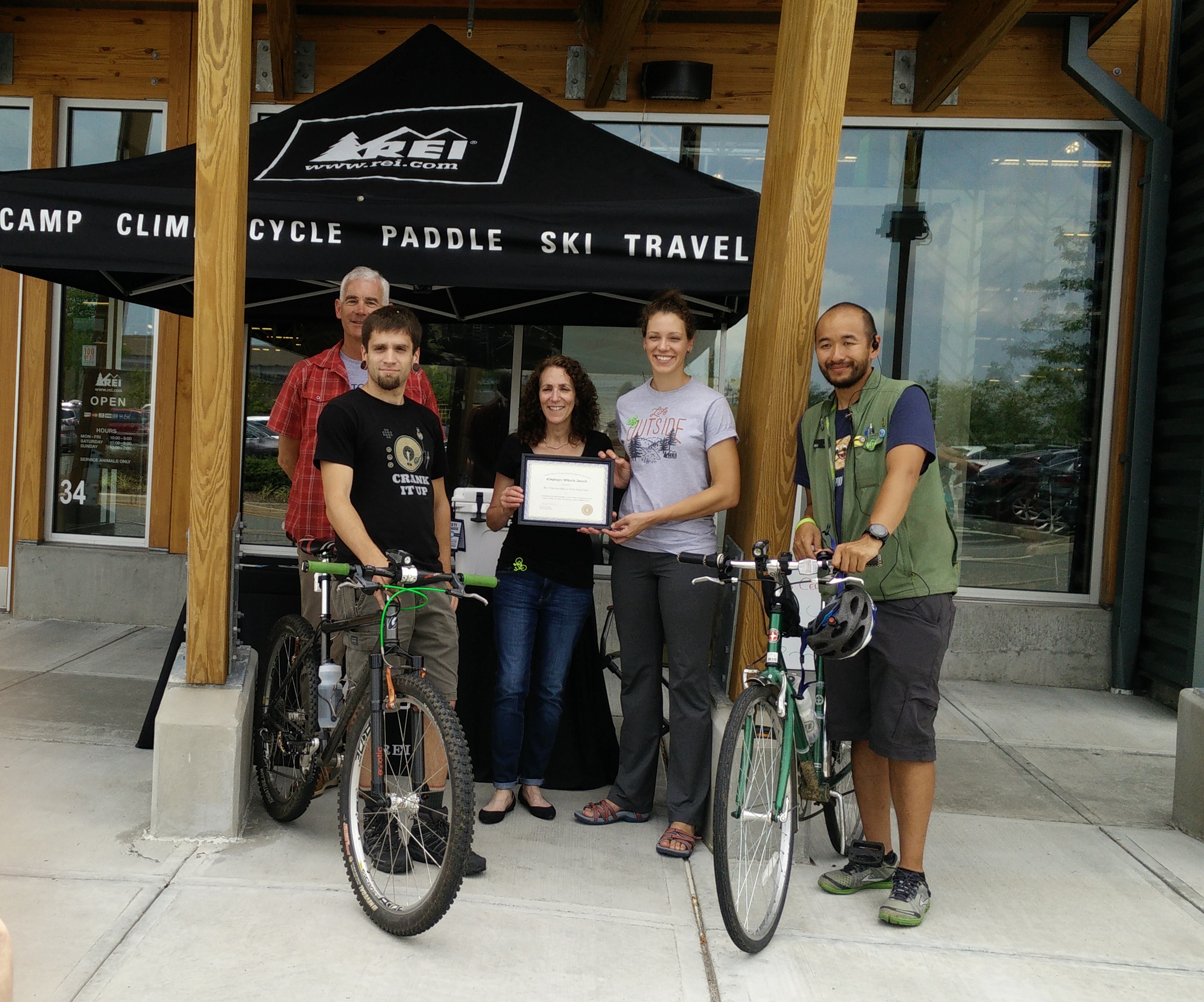 Aaron is pictured here first on the right

My biking revival started one day after work staring at a Chick-Fil-A sign at the mall for the MS Coast the Coast Bike Ride. Being active with the MS Walks since I was in 5th grade, I thought it would be a cool way to get more involved. I hadn’t touched my bike since the day I got my driver’s license. After working your standard 9 to 5 job for a couple years I gained an astounding amount of weight to my dismay. I was able to finish the MS Coast to Coast 50 mile bike ride on my old Huffy Mountain Bike with high spirits despite its 40lbs of steel and poor shifting. I felt like I was a kid again and it renewed my love for biking. I was motivated to get a real road bike, complete multiple triathlons, and three cross country bike trips!

I started bike commuting when I began working for the REI in East Hanover back in 2011. It was 23 miles one way so making the journey for every shift was time consuming so I would bike as time permitted.  With the opening of the REI in Princeton/Lawrenceville in 2015, I was now able to take the East Coast Greenway / Delaware & Raritan Canal Path from home to store but it was a longer but safer 30 mile commute. I made the move to Ewing over a year ago which shortened my bike commute to a mere 13 miles!

Before moving, my car commute was about an hour. After the move, I would still have an hour commute but I could swap out my car for my bike!  I was no longer stuck in route 1 traffic and trading it out for more canal paths and backcountry road time.

I bike commute every chance I get. Rain, snow, cold, I feel like a mailman. I have only missed a handful of opportunities to bike into work in the past year and a half.

My bike! Besides my helmet, I cannot leave home without my lights. I bike with a minimum of two blinking red lights to shine my presence on the road, even in the daytime. Grabbing the attention of drivers is the name of the game and having them give you the room you need to ride safely lets me know it’s working!

For first time riders, I suggest checking in with a local bike shop with popular bike routes in the area. This gives a rough outline for which roads are good for traveling and has a good bike presence as to not surprise motorists. Bike shops usually have good local maps marking which roads as well as the Greater Mercer TMA website (link) which grades roads by its safety factors. Google maps has a biking option but it should not be used as your primary route creating method. I have had Google lead me on roundabouts that were hiking trails, closed trails, and even busy roads. Next, drive the route (if not a pedestrian and bike path only route) to see if you are comfortable with the roads and neighborhoods. Find a free day to test bike the route to give you a sense of how long you would need to get to work on time then factor in extra time for packing your bags, the unexpected flat tire, and getting dressed for work. Bring a friend and make a day of it!

If your ride is long, just find a “Park and Ride” train station. You can also shorten your commute by finding safe public parking along the route or at a friend’s house and bike in from there. Driving to work with your bike so you bike home and back to work the next day can help split up the mileage as well. If all else fails, call a loved one for a pick up!

The scenery is one of the best things about bike commuting. There are many things to see on a bike commute doing it year round, from the flowers of spring to the frozen rivers in winter. The scenery changes almost on a daily basis to keep things interesting. The exercise I get from it also a big bonus so I don’t have to hit the gym after work all the time!

My bike commute is 13.1 miles long. I jokingly tell my co-workers that I’ll run to work one day since I run half marathons as well.

Helmet, Helmet, Helmet! I grew up in a time where it wasn’t a requirement and wearing one is not the cool thing to wear. When I began riding again, I was encouraged by people to wear one and I’m glad I listened. During a group ride, I was able to test the usefulness of my helmet in a pile up. I flipped my bike and landed on my helmet which cracked in half leaving me virtually unharmed. I have also witnessed 2 friends whose life was saved as well. Working at REI, I have seen numerous other people come into the store with similar stories as mine even on what seemed like a “safe” canal ride. Riding with traffic and as far to the right as safely possible is also a requirement. Making your moves smooth and predictable around road hazards allow drivers to predict your direction easier, and looking at parked cars for occupants to prevent getting “doored”.

Saddlebags are a lifesaver as they take the weight off your back and don’t leave you sweaty. They also keep the added weight lower for minimal ride adjustment when properly secured. They also provide the extra room I need for rainy weather gear for that unexpected shower or cold front!

I once helped 3 turtles cross the canal path on the same day. I was afraid I was going to be late for work helping these little guys and gals out! I had a good discussion with a family about turtles and how we should leave them in the wild and not make them into a pet. Blue Herons are a canal path local and find them all over the place. I once “chased” one down the path for over 2 miles as he would fly down every hundred yards, rest, and fly again! He was definitely going at least 15mph as I wasn’t able to catch up with him.