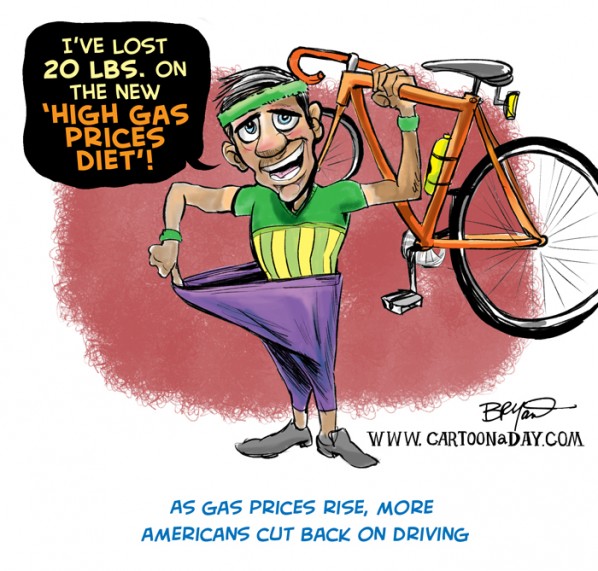 American motorists drove less last year than any since 1995, according to a recently released report from USPIRG and Frontier Group. According to the report, since the middle of the last decade, Americans have been driving less and travelling by foot, bike, or transit more.

Automobile miles traveled, adjusted for the size of the driving-age population, has dropped by about 7 percent since it peaked in 2004. The equivalent statistic for New Jersey drivers peaked in 2007 and dipped 5 percent by 2009. Because state data takes longer to produce, 2010 numbers aren’t available yet. At the same time, vehicle registrations in the state declined and the use of mass transit stayed strong, as we noted last week.

The high price of gas is one of the culprits causing this behavioral change. The national average for a gallon of gas is $3.89, the highest ever for this time of year, and experts say it could be $4.25 by late April. Gasoline prices rose by 24 percent in the last 52 weeks, according to AAA, and spending on gas rose by 20 percent during the period. In 2011, Americans spent 8.4 percent of their household income on gasoline, or about $4,155, compared with 6.7 percent in 2010.

The report also found that high gas prices aren’t the only reason for this change in behavior, which speaks well for this behavior change lasting beyond the cycles of gas prices rising and falling. The report found that young people in particular would likely continue taking transit, cycling and walking for a variety of reasons, including  improved technology, which eases the use of public transit (real-time bus tracking, for example), and environmental and health concerns.

The report also found that a majority of Americans, regardless of age, prefer to live in areas of “smart growth” (defined as places with a mix of single family houses, apartments and condos, with stores, restaurants, libraries, schools and access to public transportation).

While gas prices in New Jersey are lower on average than the rest of the nation, they’re still higher than they were at this time last year. Are rising gas prices affecting your behavior? Are any other factors changing your behavior? If so, how? Would you like to change your behavior but are unable to? Why? Let us know on our Facebook page, we want to hear from you!