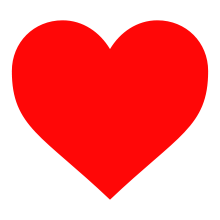 Since it’s February and February is American Heart Month, we’re going to use this opportunity to talk about heart disease and its relationship with how we get around. According to the Centers for Disease Control, every year, about 715,000 Americans have a heart attack, about 600,000 people die from heart disease in the United States each year (that’s 1 out of every 4 deaths!), and heart disease is the leading cause of death for both men and women. Cardiovascular disease, including heart disease and stroke, costs the United States $312.6 billion each year in health care services, medications, and lost productivity.

So what does that have to do with transportation? More than you might guess.  Studies show that in addition to being a real downer, long commutes are related to bad health. But studies abound showing that car commuting also correlates with higher blood pressure, bigger waistlines, and unhealthy hearts:

The commute component of all these studies adds evidence that routine commuting can add to the unhealthy effects of our transportation system and choices. Want to change the way you get around, but don’t know where to start? GMTMA is here to help. Check out our Employer Services to learn about how we can help employers encourage their workforce to leave the cars at home; learn about our programs for commuters, including carpooling and vanpooling; check out our Community Programs and learn about how GMTMA can help your community implement a wide variety of policies and programs that improve safety, mobility and sustainability; get involved in our Safe Routes to School program, which helps kids and their parents get to school safely without driving; learn how to ride your bike more; or figure out ways to ride the bus or train more often. Contact GMTMA — we can help you, your office, or your school figure out alternative ways to get around.