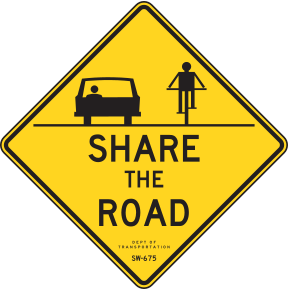 There was an interesting post earlier this week in Atlantic Citiesabout how how bike investment and infrastructure has been changing in recent years. Of course bike lanes have been around for over a hundred years; as soon as bicycles became viable modes of transport, people have been lobbying for safe places to ride them. Broadly speaking, a bike lane is an exclusive lane for cyclists, but there are many variations on that theme, including shared lanes (“sharrows”), and cycle tracks, which are protected (usually separated) bike lanes for cyclists. Cycle tracks effectively form a “bike path” on the street; cars must drive and park next to the bike lane, not the curb, and bicyclists ride between the parked cars and the sidewalk.

After yours truly spent all day last Saturday drooling over the cycle tracks in Brooklyn, I found the discussion of cycle tracks to be of particular interest.  According to the article, cycle tracks “increase ridership by 18-20 percent compared to 5-7 percent for [conventional, non-separated] bike lanes.

Cycle tracks are much more prevalent in European countries, although several US cities have recently incorporated cycle tracks as a component of their bicycle facilities. Cambridge, Massachusetts, New York City, Portland, Oregon, and Washington, DC, have all constructed cycle tracks, some permanently and some as pilot projects.

One benefit of cycle tracks is that many bicyclists feel more comfortable being separated from traffic. Consequently, there are some indications that the availability of cycle tracks may attract new riders who otherwise do not feel safe or comfortable riding directly with cars. Cycle tracks may also reduce cyclist collisions involving parked cars; they can prevent “doorings” by creating a 2-3 foot gap between parked cars and the bicycle travel lane.

On the Move readers, what do you think? Are there any stretches of roads in our region where you think a cycle track could be built? Would you be more likely to ride your bike if there were cycle tracks out there to use?