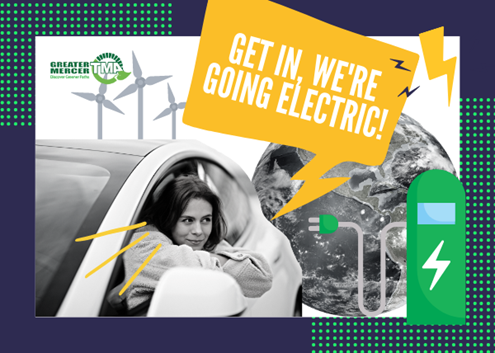 Photo by Jenny Ueberberg on Unsplash

New Jersey is leading the charge on the East Coast for electric vehicle adoption with its goal to reach 330,000 electric vehicles (EVs) in the state by 2025. This article is the first installment in a three-part series by Greater Mercer TMA on EVs in New Jersey. It will focus on EV 101: The Basics and answer basic questions about EVs, the benefits of going electric, and how to take advantage of state and federal incentives for individuals. The second installment will cover how municipalities can make the shift towards electrifying their fleets and how municipalities can identify strategic locations for electric vehicle infrastructure. Links are provided for reference, not paid promotion.

What are Electric Vehicles?

An electric vehicle (EV) is any vehicle that has a plug. The EVs we are talking about are also called battery electric vehicles or BEVs for short. Elon Musk and his line of Tesla’s are often top of mind in the EV space, but EVs go far beyond Tesla— there are more and more plug-in EV models available on the market these days, and Tesla is only one of them.

Hybrid vs. Electric: What’s the difference?

Hybrid cars, plug-in hybrid cars, and battery electric vehicles are three distinct and different things. Electric vehicle terminology is varied and relatively new to many people. It’s not always consistent in its uses, so it can be confusing to keep them all straight. We’re defining them as such below:

BEV’s or Battery electric vehicles are a type of AEV that is powered by electricity from the grid. Its battery and electric motor are large and powerful enough travel longer distances without the need for an engine or gas tank. PEV’s or plug-in electric vehicles use a battery and an electric motor to power itself. Examples of BEVs and PEVs include the Ford Mustang Mach-E, the Nissan Leaf, the Chevrolet Bolt and any of the Tesla Models.

Hybrid cars (Hybrid Electric Vehicles or HEVs) are 100% gasoline-fueled, but don’t rely solely on the engine for power. They can make use of regenerative braking where energy that is regenerated during braking is stored in a small battery and used later on for acceleration. Examples of a hybrid car include the Honda Accord Hybrid, the Lexus RX 450h and the Toyota Prius.

How do I charge an EV?

If you decide to purchase an EV, you will need to consider your options for charging your vehicle. Most EV drivers charge their vehicles at home (residential charging) and supplement their home charging with public or workplace charging. There are two primary ways that EV owners can charge at home:

To get more visual understanding of the kind of equipment required for Level 1 and Level 2 EV charging, we’ve prepared a graphic below. 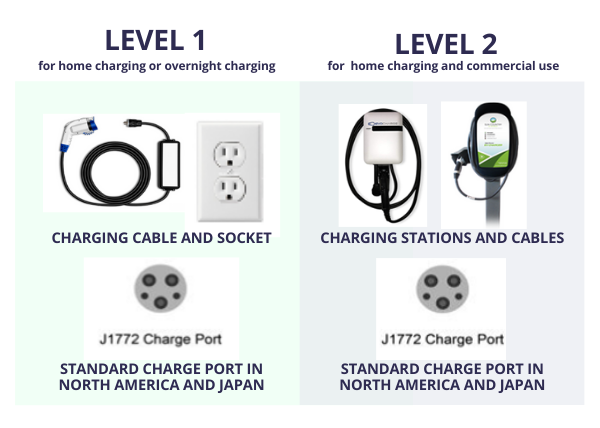 What if I run out of battery? Where can I publicly charge an EV?

Range anxiety is the fear that your EV will run out of battery before you can charge it. It is a real concern among potential EV drivers! Newer vehicles typically have a longer range (the distance or time it can travel on a single full charge) and can travel about 250 miles on a single charge. This is more than what an average driver typically drives on a daily basis. 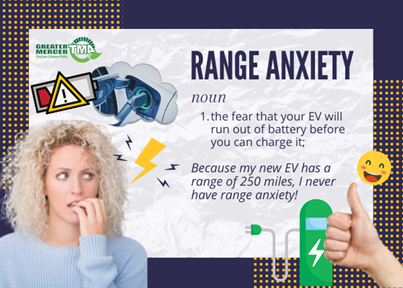 In January 2020, New Jersey passed a statewide law setting goals for plug-in electric vehicle (PEV) adoption and requirements for infrastructure development by 2050. It is considered one of the most comprehensive in the nation and it includes the following goals to increase publicly accessible charging infrastructure:

If you need help finding chargers in your area, there are websites and free or paid mobile apps that help you plan long trips and provide other useful features. Google Maps also provides information on EV charging stations. We have listed the free websites and apps for both IOS and Android users below:

Why Plug-in? Benefits of Going Green

Transportation is the largest single source of climate pollution in NJ. A 2019 report by the New Jersey Department of Environmental Protection showed that transportation accounted for 41% of greenhouse gas emissions or, to put it more concretely, 39.08 million metric tons of carbon dioxide emissions. Conventional vehicles powered by internal combustion engines (ICE) contribute to much of the air pollution that harms people, causes long-term respiratory problems, and adversely affects quality of life in our communities.

The reasons to consider converting to EVs are stronger and clearer than ever before. They are zero- to low-emission vehicles, producing extremely low levels of tailpipe emissions (if any at all) per mile. Lifecycle emissions, sometimes referred to “well-to-wheel” emissions, associated with an EV depends on the source of electricity used to charge the battery. New Jersey released its Energy Master Plan: Pathway to 2050 in 2019, which is a blueprint for meeting nearly 100% of the state’s energy needs with clean energy by 2050. The plan includes requirements for carbon-neutral electricity generation and a shift towards more sustainable, renewable energy sources. EVs using electricity produced from hydroelectric, wind, or solar sources incur less emissions than EV charged using electricity from fossil fuel 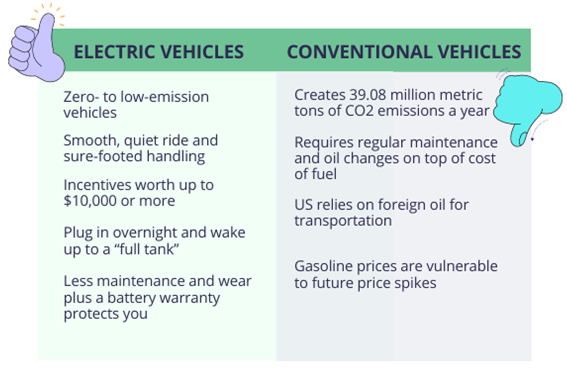 EVs are much quieter than conventional vehicles at start up and acceleration, creating lower levels of noise pollution as well.  Additionally, the per-mile electricity costs to power an EV is less than the fuel used to power a conventional vehicle. You spend 60% less on the electricity than you do for gasoline, and that’s the same as paying around $1.16/gallon to power your car. Moreover, the U.S. spends nearly a half-billion dollars on foreign oil every day to fuel people’s transportation needs. Whenever you fill your car, this money goes to foreign countries to pay for their oil. Whatever you pay for electricity to power your EV goes to the local electric utility company or your local neighborhood solar installer instead.

What’s In It For Me? State and Federal Incentives for EV Drivers

Because this technology is relatively new, the cost of owning an EV can seem prohibitive for the average driver. There are state and federal incentives for drivers who want to purchase EVs; they come in the form of vehicle tax credits and rebates as well as charging station incentives, local utilities electricity discounts and special driving perks. We previously published an article called Electric Vehicles Incentives and Charging Update, but here is a recap of it below:

Overall, there is a growing market of options for people who are interested in purchasing and driving EVs. As battery charging technology and infrastructure improves in New Jersey and throughout the United State, drivers will not have to worry about range anxiety as they travel in EVs. With directions and support from the both the federal and state government, it will only get easier to adopt cleaner, greener transportation habits and lower our individual environmental impact by converting to EVs.

In the next part of this series, we will cover tools and strategies for municipalities in adopting PEV infrastructure and meeting their municipal fleet electrification goals. We will introduce some helpful resources and toolkits that municipalities and residents can use to plan and implement these changes in their neighborhoods. We will also talk about how GMTMA can assist your community in planning and pivoting towards a cleaner, greener, and more prosperous future.