Anyone who’s ever been to, or read about, the Netherlands knows that it’s one of the most bike-friendly places in the world. Bike lanes abound, and cycling is a part of the culture. In the Netherlands, almost 30 percent of all trips are made by bike, compared to a paltry 0.9 percent in the United States. Biking is also dramatically safer in Holland. In the U.S., there are 35 cyclists injured per 10 million kilometers traveled. In Holland, that number is only 1.4!

Their bike-friendly infrastructure and regulatory environment are the reason why it’s so easy and safe to travel by bike in the Netherlands. They have extensive systems of separate cycling facilities; well-maintained, fully integrated paths, lanes and special bicycle streets in cities and surrounding regions; a fully coordinated system of color-coded directional signs for bicyclists; and off-street short-cuts, such as mid-block connections and passages through dead-ends for cars. At intersections and traffic lights, they have cool things like advance green lights for cyclists at most intersections; advanced cyclist waiting positions (ahead of cars) fed by special bike lanes facilitate safer and quicker crossings and turns; cyclist short-cuts to make right-hand turns before intersections and exemption from red traffic signals at T-intersections, thus increasing cyclist speed and safety; bike paths that turn into brightly colored bike lanes when crossing intersections; and traffic signals that are synchronized at cyclist speeds assuring consecutive green lights for cyclists. And of course, traffic calming measures abound in residential neighborhoods, with special “bike streets” where bikes have priority over cars, and “home zones” with a 7 km/hr speed limit, where cars must *always* yield to pedestrians and cyclists using the road. Bike parking racks and bike garages are also abundant, as is comprehensive cycle training for all school children and training of all car drivers to respect pedestrians and cyclists. Motorists are assumed by law to be responsible for almost all crashes with pedestrians and cyclists!

But, as noted in this Project for Public Spaces article, the Netherlands wasn’t always such a bike haven: “It was the result of a lot of hard work, including massive street protests and very deliberate political decision-making.” The video in the post offers a great historical perspective on how the country turned around its automobile-centric trends and made a conscious decision to become less auto-dependent. As the article concludes, “…there is nothing inherently exceptional about the country’s situation. As the narrator says at the end of the film, ‘The Netherlands’ problems were and are not unique. Their solutions shouldn’t be that either.’ ” 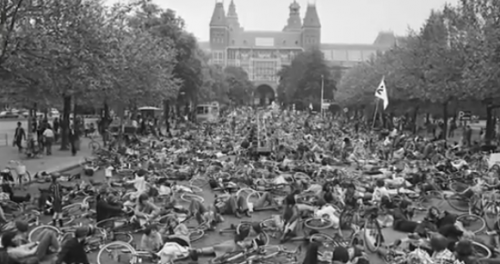 Mass protests against the domination of cars were one factor that led to the superb cycling infrastructure of today's Netherlands.