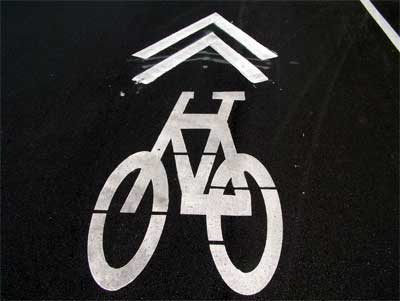 Much to the excitement of bicyclists in the GMTMA region, shared lane pavement markings, otherwise known as sharrows, are about to make their first appearance in Princeton later this month.

According to the Princeton Packet, Nassau Street will be marked from Route 206 to Snowden Lane; markings will be placed on Wiggins Street and Hamilton Avenue in the Borough; Harrison Street to Mount Lucas Road in the Township will have markings; and Harrison and Witherspoon Street will be marked their entire lengths. A maximum of 87 symbols will be installed in the borough, and the State Department of Transportation will install additional 60 on Nassau Street. Approximately 72 markings, at $170 each, will be installed on the township roadways. The borough’s share of the installation costs is $14,800. The township is paying the remainder of the $29,920, or $14,400. The actual number of symbols that end up being installed will determine final cost.

It is hoped that the roadway markings will allow cyclists and drivers to safely share the road along the area’s streets that are too narrow for separate bike lanes. Unlike bicycle lanes, sharrows do not designate a particular part of the street for the exclusive use of bicyclists. They are markings to guide bicyclists to the best place to ride and help motorists expect to see and share the lane with bicyclists.

What do sharrows mean for motorists and bicyclists?

Motorists:
• Expect to see bicyclists on the street
• Remember to give bicyclists three feet of space when passing
• Follow the rules of the road as if there were no sharrows