Exciting transportation projects are underway in communities across Mercer and Ocean County. With 2022 right around the corner, we’re reimagining the different ways to improve walking, biking, driving, and taking public transit in our region. Here’s the lowdown on three initiatives that inspire and excite us.

Rail and Other Modes – Princeton, NJ

This month, NJ TRANSIT released a preliminary study for imp

rovements along the Princeton ‘Dinky’ Rail Line. The ‘Dinky’ is a two-car train that runs back and forth on a 2.7-mile-long track between Princeton rail station on Alexander Street and the main Northeast Corridor (NEC) rail line at Princeton Junction station. The trip currently takes about 6 minutes in each direction, with no stops between Princeton  station and Princeton Junction station—it is said to be the shortest commuter rail service in the USA. As the Dinky faces challenges with declining ridership and some much-needed vehicle upgrades, NJ TRANSIT is taking this opportunity to evaluate the corridors potential for expansion and upgrades to better meet peoples’ changing travel needs.

The study presents opportunities for multimodal use and improved local and regional connections for bus and rail transit, and pedestrian, bicycle, and micromobility use. The four alternatives are as follows: 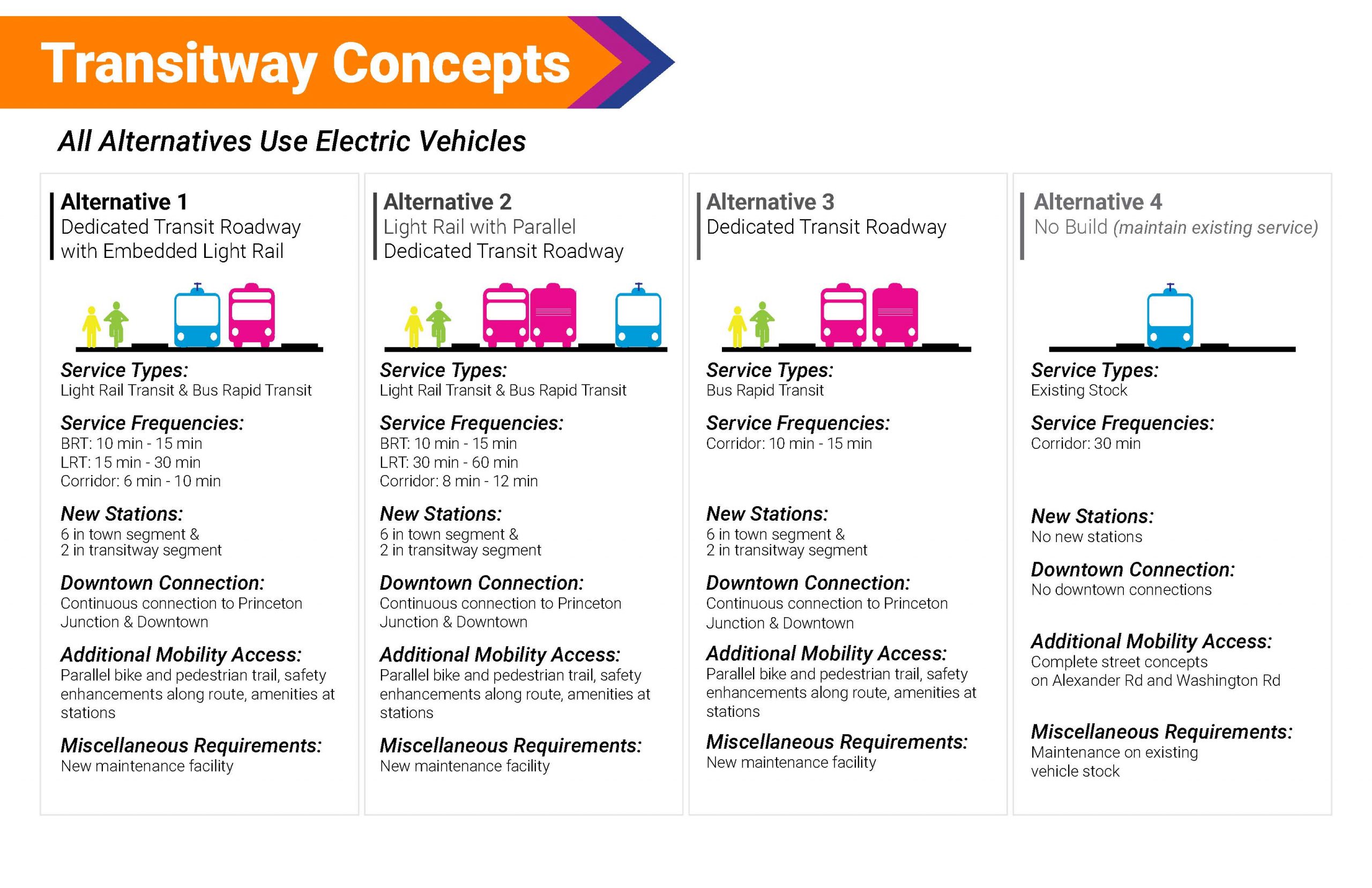 The preliminary study also included a survey that ran between May and June 2021 to learn more about the perceived opportunities and challenges for the Dinky. Of the 1300 responses, the following were identified by respondents as the most important needs:

Additionally, responses showed an increased interest in bicycle and pedestrian connections. NJ TRANSIT says that it will consider this while developing the final plan for the Princeton Dinky corridor.

Want to get involved? Community members are called to provide their feedback on the four alternatives through this 5-minute survey. The survey is up until December 29, 2021. Interested parties are encouraged to stay engaged in upcoming virtual meetings, project status updates, and other news releases. You can find more information on the project here.

Have you ever imagined a world with all-electric, self-driving bus transit? Trenton could get New Jersey’s first autonomous vehicle (AV) transit micro-transit system after the Governor’s office put out a call for a “Request for Expressions of Interest” (RFEI) for companies who could potentially design, build, and run the system.

The concept is called Trenton MOVES (Mobility & Opportunity: Vehicles Equity System) and is being developed by the Governor’s Office, NJDOT, the City of Trenton, and Princeton University. It is in its early stages—no funding or final plans have been approved yet. The state is asking for a system that would use a fleet of 100 electric powered, self-driving autonomous vehicles that could transport people on demand. Riders would call for a ride with a smartphone app or from one of 60 kiosks in Trenton and on the outskirts of the city. Though different in scope, we have seen on-demand, electric micro transit systems in Texas (“Rapid” in Arlington, TX) and Brooklyn (“Optimus Ride” in Brooklyn, NY), as well as in Norway, Finland, Estonia, Greece, and the Netherlands. 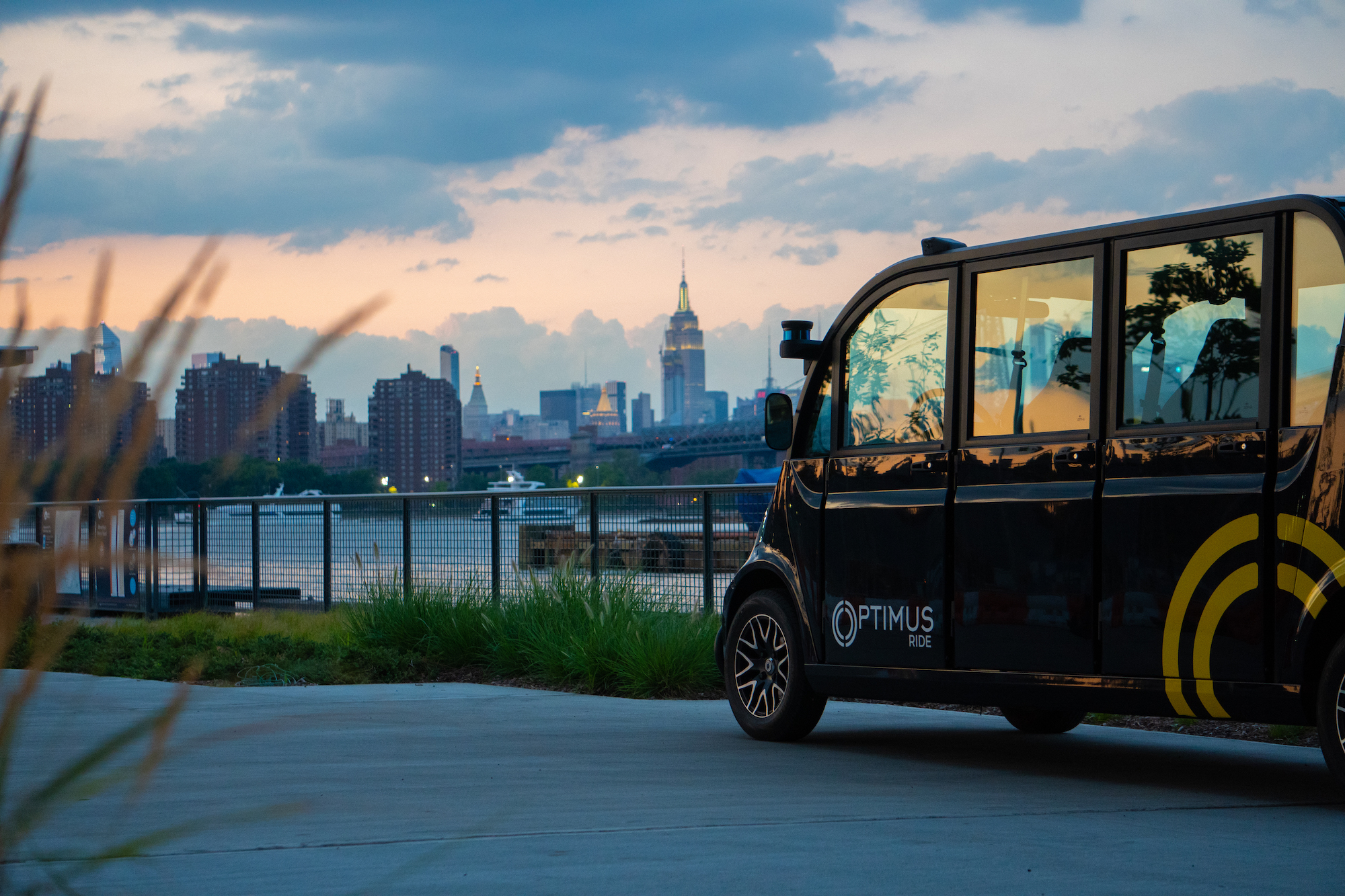 If funded and successfully launched, the Trenton MOVES could serve 70% of households in Trenton that don’t have access to a car. It is envisioned to be a safe, inclusive, affordable transportation solution for neighborhoods underserved by public transit. The vehicles should include heating, air-conditioning, wheelchair accessibility, and audio and signage in English and Spanish. It should also be able to accept credit cards, transit passes, and ride vouchers.

NJ Department of Transportation Commissioner Diane Gutierrez-Scaccetti said in a statement, ““Trenton MOVES represents an opportunity to utilize innovation to sustainably improve the quality of life of the mobility-constrained in many of our cities. By starting in Trenton, we will have the opportunity to work with a close and effective partner. Ultimately our vision is that this effort will ideally scale throughout the state and the region.”

The NJDOT is calling for the Request for Expressions of Interest (RFEI) to help gather information from firms in the design, build-out, and operation of a safe and equitable automated vehicle transportation system for Trenton. In construction, an RFEI is a preliminary document to get information from potential vendors, while an Request for Proposals or Qualifications (RFP/RFQ/RFPQ)  is a document that a firm can request from potential vendors to get an overview of project offerings and the cost of service/s. Responses to the RFEI will not necessarily impact or be connected to any call for Proposals or Qualifications. Only after the RFEI solicitation period will the NJDOT issue formal requests for Qualifications or Proposals.

The deadline for the RFEI response is February 11, 2022. Click here for a copy of the official Request for Expression of Interest. 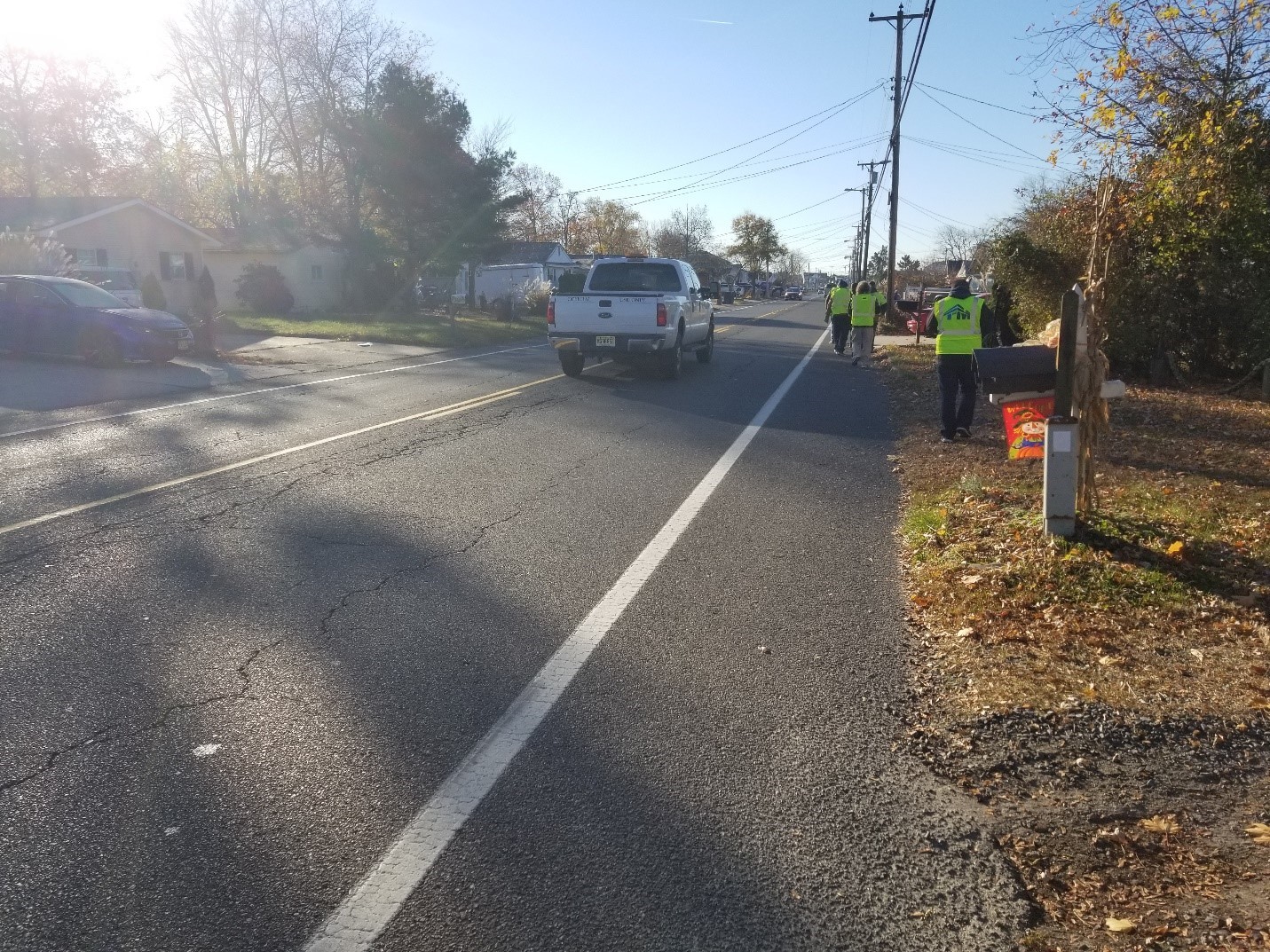 We at Greater Mercer TMA want to help make your neighborhood roads safer, more walkable, and pedestrian and bike friendly.

After receiving multiple reports of cars speeding on Radio Road, the township approached GMTMA to conduct a sidewalk inventory and assess shoulder conditions and the width of existing sidewalks. The stretch of road in question is home to several high-density residential developments, strip malls, and other businesses, and is the location of 220 reported crashes between January 2010 and December 2020.  Three of these crashes were fatalities, including one 13-year-old girl near Mystic Island Playground in 2013 after a driver traveling at 74mph (in a 40mph zone) struck the girl as she was walking.

Our team also audited the intersection of Mathistown Road and Radio Road, located near bus stops where many crashes occur. The intersection is also located near several shops and restaurants, the Municipal Building, Police Station, and also the Senior Center.

Our team is in the process of preparing a final report with findings from the audit and recommendations for improving safety and walkability in the study area.

Interested in conducting a walkability audit for your community? We can help identify concerns for pedestrians related to the safety, access, comfort and convenience of the walking environment. An audit can also help identify potential solutions such as engineering treatments, policy changes or education and enforcement measures. For more information, call us at 609-452-1491 or e-mail tma@gmtma.org