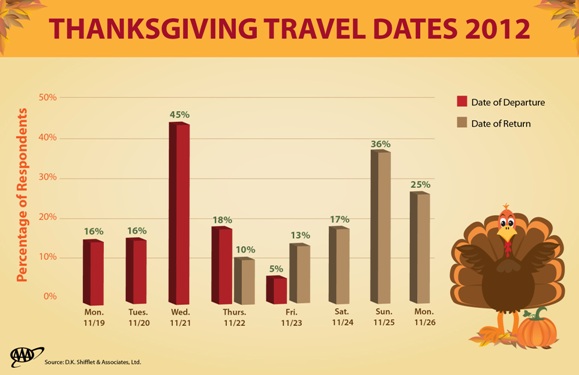 AAA has come out with its 2012 Thanksgiving holiday travel forecast, and they project that 43.6 million Americans will journey 50 miles or more from home during the Thanksgiving holiday weekend, an increase of 0.7 percent over the 43.3 million people who traveled last year. This increase marks the fourth consecutive year of growing holiday travelers since 2008 when Thanksgiving travel fell by 25 percent. They also predict that ninety percent of travelers — approximately 39.1 million — will travel by automobile, an increase of 0.6 percent over last year.

Thanksgiving travel hit a decade low in 2008, and since that year there has been a steady increase in the number of travelers taking to the roads and skies for the Thanksgiving holiday.

It’s unclear the impact Hurricane Sandy will have on our region, but with some trains still not running and some communities still devastated, getting around could be harder than normal this year.

As always, Wednesday is expected to be the busiest travel day. Among those surveyed by AAA, the majority of travelers plan to leave the Wednesday before the holiday (45 percent) and return the following Sunday (36 percent) with another 25 percent expecting to return on Monday, Nov. 26.

Considering Transit for the Holidays?