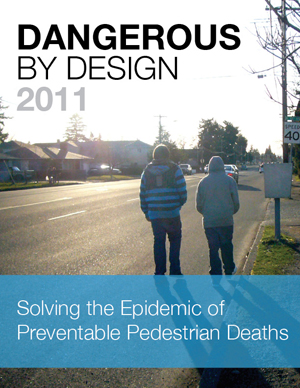 Transportion 4 America released a new report this week about pedestrian safety offering maps and rankings of who’s doing this right and how the worst places can improve. Pedestrian safety is something that often gets overlooked in the news cycle that is dominated by things like plane crashes, tornados, and disease, which is precisely why it is the kind of problem that society under-invests in. Here’s hoping this report, and others like it, draw some needed attention to the problems of pedestrian safety and badly-designed streets.

The 2011 edition of their pedestrian safety report looks back on the 47,000 people that were killed and 688,000 injured while walking our nation’s streets in the ten years from 2000-2009. Dangerous by Design 2011 examines the problem and several solutions for these mostly preventable deaths. The report includes a factsheet for all 50 states, including New Jersey, and shows that in the Garden State between 2000 and 2009, 1,514 people were killed while walking in New Jersey. These accidents cost the state $6.51 billion. The report notes that reducing pedestrian fatalities just 10% would have saved New Jersey $651.02 million over 10 years. New Jersey’s overall Pedestrian Danger Index (PDI) is 53.2, which ranks 21st out of 50 states. Could be worse…but could be a lot better, too. In Mercer County, almost 20 percent of all traffic deaths were pedestrians.

The report also comes with a powerful visual: they have taken the pedestrian fatalities from 2001 to 2009 that have location data (all but about 5 percent) and plotted them on an interactive map, allowing you to take a look at the streets and roads near you to see how safe or unsafe they may be. Check it out here: http://t4america.org/resources/dangerousbydesign2011/map/. Type an address and once the map draws, click on any point to see the available information about the victim, the date, the location, the street type and even what the road looks like via Google Street View.

For a slideshow of the 10 deadliest pedestrian metro areas in the country, click here.