This week’s post comes from a guest blogger, Tineke Thio, who also serves on Princeton’s Bicycle Advisory Committee, and it also appears on their blog – thanks!

Some are un-apologetical fair-weather riders. Some don’t leave home without their bikes unless a brutal polar vortex has parked itself over New Jersey.

Wherever your limit lies, for those days that you have places to go, but don’t want to or can’t get there on your bike, try the bus. Sure, NJ Transit buses go through Princeton – but here I want to tell you about Princeton’s local buses. 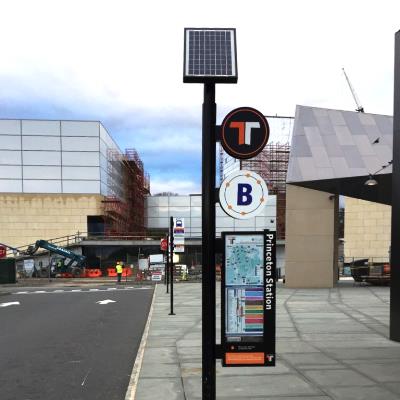 FreeB
The FreeB is Princeton’s jitney; its cute logo, the blue “B” surrounded by a constellation of orange dots, is displayed on the bus stops and on the bus itself (named “Marvin”, after former Princeton Borough Mayor Marvin Reed).

It comes in two versions, commuter and daytime; the latter runs between 9.40am and 4.30pm. The two versions have different routes: for instance, only the commuter FreeB goes to Princeton Station, and only the daytime FreeB passes by the Municipal Building on Witherspoon Street. If you click on the links in this sentence, that downloads the PDF files of the map and schedule for the Commuter FreeB, and the Daytime FreeB. (In case you’re wondering: Yes, Princeton is working on getting the FreeB schedules on Google Maps).

Note: even though the schedules say you can flag down and board the FreeB between stops “where it’s safe to do so”, in practice you’re best off boarding at a designated stop. Bus drivers are highly risk averse – and that’s how we like them!

Tiger Transit
As you can see from the maps, the FreeB services mostly the town side of Nassau Street. For travel on the University side, there’s Tiger Transit, Princeton University’s bus service which is also free and open to the public. Their buses are fully accessible, and have bike racks.

Tiger Transit coverage is of course densest around Princeton University, but its routes cover an area extending to the new Merwick Stanworth apartments, the Forrestal Center / Plasma Physics Lab, and Canal Pointe Boulevard.

Moreover, Tiger Transit buses have trackers, so you can see where they are at any time on this TigerTracker map.

And tell your friends about it.

We would like to thank her for sharing her thoughts!