Making sure everyone knows the rules of the road is of the utmost importance for the safety of pedestrians, bicyclists, and drivers alike. So we’d like to give a round of applause to the West Windsor police department, which, in response to an accident last week where a township teen was hit by a car after exiting a school bus, announced a new push to patrol bus stops and educate drivers on the right ways to drive near school buses dropping off kids.

If you’re a regular reader of this blog, you already know that Greater Mercer TMA is the New Jersey Department of Transportation’s designated Safe Routes to School coordinator for Mercer and Ocean counties, meaning that we work with schools, parents, communities, and law enforcement in our region to find ways to teach and encourage kids to walk and bike to school — and to make sure that they are able to do so in a safe and secure environment.

One of the facets of this is driver education, including teaching drivers how to behave around school buses (as the West Windsor police are doing) as well as educating drivers about how to behave in the vicinity of a school.

Each driver on the road contributes to or detracts from the safety of the walking and bicycling environment for children. Failure to comply with traffic laws and posted speed limits are examples of driving behaviors that result in unsafe conditions. According to a comprehensive SRTS guide developed by the Pedestrian and Bicycle Information Center:

As part of Greater Mercer TMA’s Safe Routes to School work, we can help communities craft key messages for drivers near schools and near school buses, and provide strategies for reaching drivers who drive near schools. Interested in working with us to make your town safer? Contact us today.

Drivers traveling at safe speeds, yielding to pedestrians and cyclists, and stopping at stop signs and crosswalks help create a pedestrian and bicyclist-friendly environment. Bravo to the West Windsor police department for understanding the importance of education in keeping our kids and drivers as safe as possible. 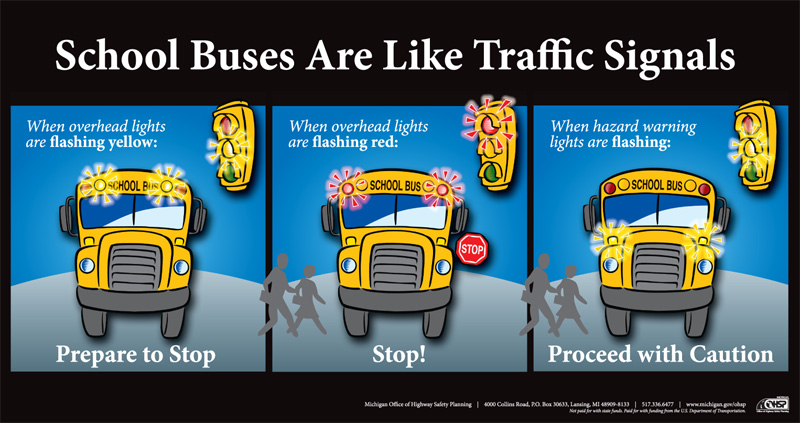 Graphic courtesy of the Michigan Office of Highway Safety Planning