There’s an interesting article on Grist.org that makes the argument that living in a bike-friendly place not only helps the environment and your own health, but is actually good for your personal bottom line and the economic health of your community. According to the article, conservative estimates of how much you would save each year by ditching your car and getting on a bike instead ranges from $3,000-$12,000. These savings, they argue, can help save our economy:

In the many North American cities where two-wheeled transportation is taking off, a new bicycle economy is emerging. It’s amazing how much money can stay in your community when it isn’t being pumped into the gas tank, big insurance, and the auto market.What will this new bicycle economy look like?

We don’t have to guess. It’s already emerging along urban, low-traffic bikeway networks nationwide. One thing is guaranteed: it includes a lot of new bike shops like this one on a bikeway in Baltimore — one of five new bike shops to have opened in the last two years in that city. A 2008 study in Portland clocked bicycle-related industry alone as contributing $90 million to the local economy every year. Bicycle tourism is another huge boon to regions that can attract it — in 2010, Wisconsin bragged of a yearly $1.5 billion bike economy [PDF].

Less obvious synergies abound as well. People who ride, just like people who drive, buy groceries, visit the doctor, need a new shirt sometimes, and enjoy dinner and a movie. They work. Their kids attend school. Despite the media attention given to mega-mileage supercommuters, for most people who depend on bikes for transportation, life works best with all these necessities in reasonable biking distance — say, less than five miles — from their home. Preferably along routes that don’t include riding on highways or having to zip anxiously across them.

Bicycle parking is the indicator species of this new economy, with a business’s enthusiasm for its two-wheeled clientele being easy to gauge by the quantity of bike racks out front. In Portland, businesses impatiently line up to replace their car parking with on-street bike racks. One local grocery store recently opened a location with more parking for bicycles than for cars.

Then there’s the food cart boom that’s overtaken Portland — every previously vacant alley and parking lot, many along major bike routes, seems to have spawned a semi-permanent pod of them. As a business model, it’s a natural response to a population that craves cheap lunch, prefers not to travel far, and doesn’t need a 7′ x 20′ piece of real estate to park on.

There are many more local benefits of the bike economy, from lowering families’ health care costs to reducing a business’s need to invest in costly parking spaces for staff and customers. And you can’t place a monetary value on happiness. 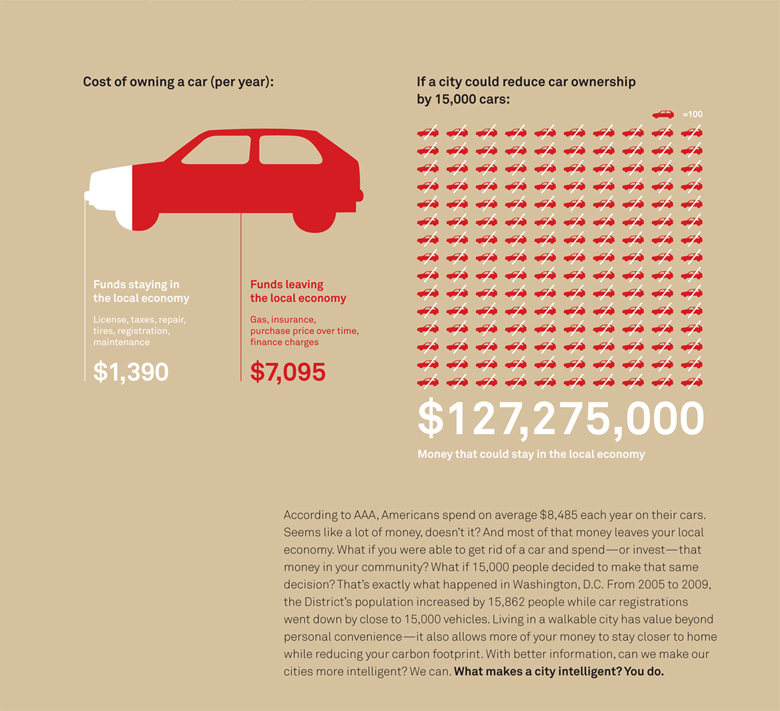