While we here at GMTMA think that mass transit is the greatest thing since sliced bread, we’re also realists. We know that, sometimes, waiting for the train or bus that didn’t arrive on schedule can be a maddening experience (although we’d argue that it’s equally maddening to sit in a never-ending traffic jam on the road).

“Real time” transit information can help, though, either via an information monitor at the transit stop, via the internet, or via your cell phone. It’s a service that is taking off; for two years NJ Transit customers with smart phones have been able to enter their station into the DepartureVision feature on njtransit.com and find out when the next train will arrive. DepartureVision launched on a trial basis in 2009 and became available for all NJ Transit stations last year. It allows customers to view train departure screens — including train status and track assignment — on their desktop computer or web-enabled mobile device. Customers can also click on an individual train to see arrival times at the stations it serves. 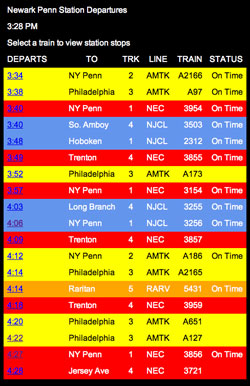 Additionally, last spring, the transit agency stepped up its game and started offering help for customers with phones that are not web-enabled — by providing real-time transit schedule information through text messaging. Customers text a station-to-station request — “Trenton to NY Penn,” for example — to 266266 and the company texts back the next scheduled trains as a list of menu options. For additional information, customers text the letter of the menu option and get a reply with details such as fares and travel time. The service works from any phone — standard text message rates apply — and does not require internet access.

Google is also trying to change the ease at which we can get transit information. Google Transit allows you to search transit directions by types of transit and time spent outside. Want to take the light rail and not the bus? Willing to take a longer route if it means fewer transfers and time spent outside in the cold? Google can give you that information: the search engine empire now publishes the operating schedules of more than 475 transit agencies around the world through its Google Maps and Google Transit platforms. And though it only displays live updates for four U.S. cities (plus two more in Europe), Google is pushing for more real-time status updates.

But while real-time transit information is very useful to existing riders, do these services actually increasetransit ridership? According to a a recent Atlantic Cities article…maybe. “The current research literature doesn’t address the question of whether real-time data increases ridership in any definitive way. Some recent studies do suggest that ridership has increased on routes with live status updates, but that work has failed to account for other factors that influence ridership, from gas prices to employment levels. A 2003 survey of systems with real-time information, conducted by the Transportation Research Board [PDF], concluded as much: ‘Most agencies reported that there may have been an increase in ridership, but that they were not certain that it was a direct result of the system. At a minimum, real-time bus arrival information systems assist in the maintenance of ridership.’ ”

The articles goes on to point to new research in Chicago which found that it might be working, at least in the Windy City. “New research set for publication in the June issue of Transportation Research Part C concludes that the Chicago Transit Authority’s Bus Tracker has attracted a significant (if modest) amount of new riders to the city’s bus system. The results suggest that real-time transit tools might serve not only to satisfy existing transit riders but also to entice new ones.”

As usual, we want to hear from you, readers! We want to know how you feel about real time transit info, whether or not you use it, how you use it, and if better information would increase the likelihood that you’ll use transit in the future.