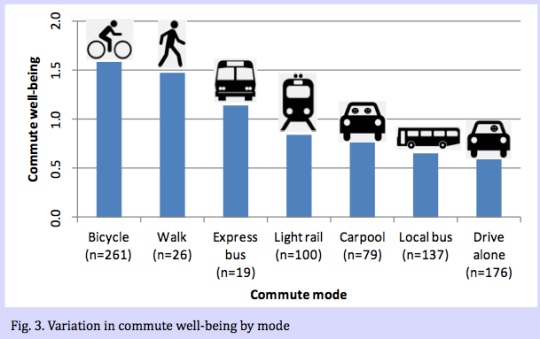 In what should come as no surprise to anybody who has ever switched from a driving commute to a walking or biking one, new research out of Portland State University found that people who bike to work enjoy their commutes the most, and people who walk to work are close behind on the commute satisfaction scale.

The finding is based on a survey of commuters from the region conducted by Ph.D. candidate Oliver Smith. Based on surveys from 828 people taken during January through February of 2012, he found that commuting to work under your own power “increases commute well-being.” In other words, the happiest commuters are those who walk and bike. Of course I was happy to see that of all modes surveyed, biking made people the happiest (see chart). The lowest measures of commute well-being were recorded by people who drove alone.

Smith’s research also found that people who make over $75,000 per year, and people who are happy with their job and housing situation were more likely to report a high commute well-being. Major factors that dragged down well-being scores included traffic congestion (non-existent for bike riders), crowded transit vehicles, safety concerns (especially for bikers), and travel times longer than 40 minutes (for auto drivers only).

Want to drive less, but don’t know where to start? GMTMA can help you figure out alternative ways to get around. Check out our Employer Services to learn about how we can help employers encourage their workforce to leave the cars at home; learn about our programs for commuters, including carpooling and vanpooling; check out our Community Programs and learn about how GMTMA can help your community implement a wide variety of policies and programs that improve safety, mobility and sustainability; get involved in our Safe Routes to School program, which helps kids and their parents get to school safely without driving; learn how to ride your bike more; or figure out ways to ride the bus or train more often. Contact GMTMA — we can help you, your office, or your school figure out alternative ways to get around.