To celebrate the end of Bike to Work Month let’s take a look back at the history of the bicycle and see how far we have come. 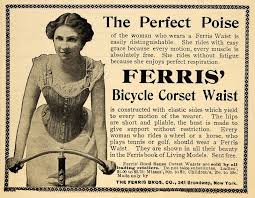 Whether it is bicycling to work, to the park, or around the neighborhood both men and women can enjoy taking their two wheels out for a spin. However, the advent of the bicycle did not begin with a smooth ride. Bicycling became a popular mode of transportation in the late 19th century. During this time, there was much controversy over women riding bicycles. Something that is such a non-issue today, turned into a big issue in the 1890s!

Advertisements for the bicycle that were targeted to women began to appear in newspapers. Women typically tended to the home and raised their children. This was considered the “woman’s sphere”– the pre-determined roles of a woman in society. Bicycles were viewed by members of society as masculine. They thought bicycling did not “fit” into their world. Therefore advertisers, who wanted to make money selling to women, had to be creative when marketing bicycles to women. They had to make their ads work within the rules of society to make bicycling acceptable for women.

Advertisers were attempting to tell women through advertisements that it is okay to live outside the women’s sphere by buying and riding a bicycle. However, their advertisements reinforced the traditionally accepted values of the woman’s sphere. Instead of promoting adventure or athleticism, they connected the bicycle to romance and marriage. The bicycle was so much more than that—it allowed women to be mobile and travel outside of the home. Women could move outside of the sphere and into larger parts of the world.

Women took advantage of the benefits the bicycle provided them. Bicycling gave women freedom. It allowed them to get out of the house and move about freely. Women were changing the social rules of their own lives. The bicycle gave women the opportunity to both figuratively, and literally, ride out of the woman’s sphere.

One-third of our bike to work registrants this year were women!