The League of American Bicyclists (LAB) has just released its 2012 state rankings on bicycle friendliness, and we’re happy to say that New Jersey is #7 on the list. Washington is again the top state in the nation in these rankings, followed by Minnesota (2), Massachusetts (3), Colorado (4), Oregon (5), Wisconsin (6), New Jersey (7), Maryland (8), Maine (9), and Delaware (10).

New Jersey got points for including bike safety in its highway safety plan, and for its bike education for police. The report also gave New Jersey props for its promotion of Complete Streets policies throughout the state, the percentage of people who commute by bike, and its active advocacy groups. The report’s top tip for improvement in New Jersey is to adopt a vulnerable road user law that includes a minimum safe passing distance and stricter consequences for violations. The report also recommends, among other things, that the state adopt federal funding project rating criteria that incentivise bicycle projects and accommodations. The state is spending a low amount, less than 0.99 percent, of federal funding on bicyclists and pedestrians, particularly on transportation enhancements.

The League annually ranks all fifty states for bicycle friendliness. They do this based on a multi-faceted Bicycle Friendly State (BFS) questionnaire that is answered by each state’s Bicycle Coordinator. The data collected – based on 56 questions, across five  categories – is verified by League staff in concert with advocates in each state. 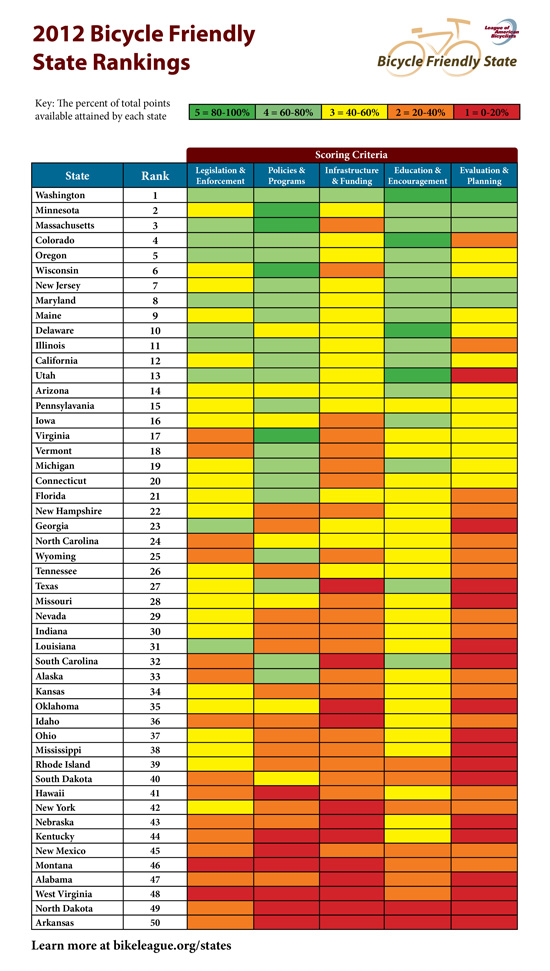