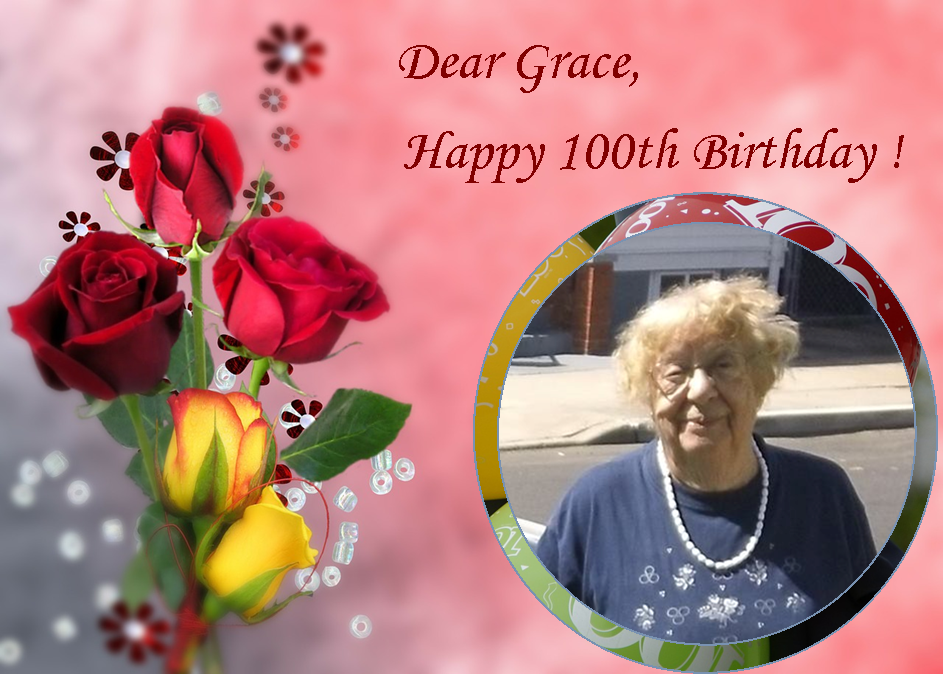 Grace Bolge is a long time rider in GMTMA’s RideProvide program.  She’s made quite an impression on us and the Ride Provide staff wanted to make sure her birthday would not pass without at least a little bit of a fuss over her.

She generously agreed to talk to me over the phone and share some of her life’s stories.  It is hard to pick and choose what to share and I will try including as much as I can from all the things she told me. I had so much fun talking to her and I hope you will too reading about her.

I asked when did she start using Ride Provide and she said “since they were an idea”, before the door to door service even started. She thinks the service “was a wonderful idea, better than the van” because the van has a certain route and “they take you all over the township before you get where you need to.” Grace thinks fondly of the RideProvide drivers and she remembers she had promised to donate her “old junky car” to Ride Provide. She intends to keep her promise even if Ride Provide now has new cars.

It is her way to show how much she appreciates the service. Grace said: “I don’t think I could live in my house if it wasn’t for Ride Provide.  And her caregiver too: “I am very fortunate to have a wonderful caregiver, Cristina, a Polish woman that was hired through Helping Hands.” Cristina does all the shopping and cooks amazing meals for Grace. “When I sit at the table I feel like Queen Elizabeth, with the pierogi, stuffed cabbage and the soups! The soups are so good; I would take the recipe and sell it to a restaurant, it would be called Cristina soup.”

As for how she stays sharp, Grace says she does her own finances, “to the penny”, and she plays piano (she says she is not a classical pianist but can play the Star Spangled Banner).  “Every time I got a teacher’s job (she began teaching in 1932), I was asked to play the Star Spangled Banner at the assembly.” She also loves learning new languages and she taught Latin, English, and Spanish for many years.  She also learned German, Hungarian, and recently Polish.  Nowadays she is speaking with her caregiver “with a dictionary” and although she wanted to teach her caregiver English, she says “I am learning more Polish than Cristina learned English (laughter).”

Grace advises everyone to “learn a language and play an instrument”.  She does agree with the research claiming that learning a new language and playing an instrument keeps your brain sharp and she seems to be living proof that it works. She recited a La Fontaine Fable in French which she remembers from many years ago!

She also remembers all the details and dates about how she met her husband, George, in 1928 when they were in 8th grade; when they both graduated from Trenton High, and when they got married on July 4th, 1940. They were married for 66 years and she remembers George as a “good man”.

Her career took a different path after 1942 when she had her two children and only did substitute teaching for a while. When she got back from her break raising children and substitute teaching, Grace got a job as the Director of Guidance Department, a fairly new department back then. Grace says “we had no diplomas for that job; I had to go get a certificate”. She says her son is joking about it and calls her generation the “certificate generation.”

Grace worked as a counselor for the next 18 years and it turns out this job was a good match for her. She loved the individual interactions and the way she could pay individual attention to students.  It turns out they loved her too since she later received the “Outstanding Guidance Counselor of Year” award. But that was not the only outstanding job she did. After she retired, Grace took paralegal classes and she started working as a paralegal, she later won the “Paralegal of the State award”.

When I asked Grace what she thinks of the current school conditions she said that school environment has changed and the focus shifted to individualism rather than collaboration which is not necessarily good.

The other thing she finds surprising is the way the economy has changed: “I can’t believe how prices have jumped.”  (She did witness the 1929 market crash, I bet she can tell us a few things about the economy)

The world around her has changed a lot, especially the last 20-30 years. However she likes to keep informed and stay on top of things (she does have a Facebook account), she reads her newspaper (“without glasses”). She also maintains a positive attitude and when the children call to check on her she is happy to report “nothing hurts.” Positive attitude seems to help longevity. That and genetics; Grace’s mother lived to be 103.

Looks like Grace’s teaching days aren’t done yet…her lessons on staying sharp and positive as you age are ones we should all try to follow!

Happy 100th Birthday Grace!  We look forward to riding with you for many years to come!