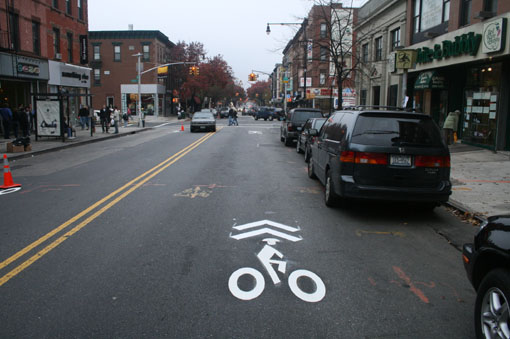 We’ve blogged about Princeton’s new sharrows before, and now that they’ve been there for a while, we’re wondering if you’ve had any experience with them, either as a driver or a bicyclist.

A “sharrow” — the word is an combo of “arrow” and “share the road” — are popping up all over the place, not just in Princeton. Municipalities like them because they’re cheap, at only about $229 each (on average) to install, including labor and materials, while a full-blown bike lane can cost between $5,000 and $60,000 per mile. Also, many older streets are simply too narrow to accommodate a bike lane. The sharrow’s main purpose is to give bicyclists freedom to move further to the left within the travel lane, rather than brave the door zone, squeezed between moving and parked cars. Without the markings, bicyclists might seek refuge on the sidewalk or travel in the wrong direction.

So, On the Move readers, what do you think? Do you like them? Do you think they help? Do they just confuse you? Let us know.

And if you’re curious about the technical side of things, here’s an interesting post about how sharrows were actually made on Fifth Avenue in Brooklyn.