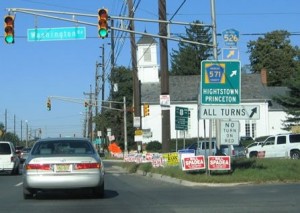 The New Jersey Department of Transportation has announced two upcoming public meetings to discuss their eight-week pilot project to restrict left turns and U-turns on Route 1 at Washington Road and Harrison Street.

The meetings to discuss the pilot project will be:

The pilot project is an attempt to reduce congestion along the stretch of Route 1 where the three right lanes of traffic become crowded with drivers lining up to make left turns, particularly during peak travel periods.

Closing access to two of the major arteries into Princeton from Route 1 north has been met with some concern from Princeton residents and officials who see an already congested rush-hour commute potentially becoming even worse as commuters are routed along an already busy Alexander Road. NJDOT intends to use this trial period to evaluate these potential impacts to local roads could be, and those evaluations will help determine if the restrictions become permanent or are modified. NJDOT will collect traffic volume and trip-time data at numerous locations in Princeton Township, Princeton Borough, West Windsor and Plainsboro before and during the trial period.

We’d all like to see less congestion reduced on Route 1, but is this the best way to do it? And if not, what other ideas do you have? On the Move readers, what do you think about this plan? We’d like to hear from you. And so would NJDOT — if you can, please attend one of these public meetings next week so your voice can be heard on this important proposal.

Below is NJDOT’s full press release: