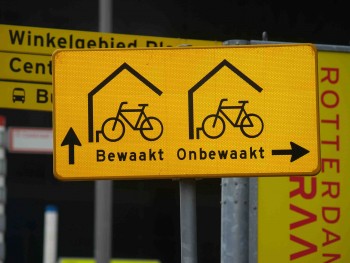 In a country with a sprawling 20,000 mile network of world-class bike lanes and daily ridership of numbering in the millions, it’s fair to say the the Dutch are the biggest cycle-lovers around. But with an average of 1.3 bicycles per resident, things have gotten crowded — resulting in bike parking shortages, cycling traffic jams, and even fits of lane-rage.

When you have more bikes than people, you definitely have a lot of bikes! Still, it seems like it’s better than the alternative: too many cars. The issue isn’t exactly the number of bikes, but that the growth in cycling has outpaced the necessary companion infrastructure to accommodate it. In fact, the topic was on the agenda at a recent city planning conference in Utrecht, where, according to AFP, “proposed solutions were remarkably similar to those previously used to deal with car congestion, ranging from building multi-storey underground “mega” bicycle sheds to impounding badly-parked bikes.”

Given the Dutch history of commitment to eco-friendly transportation, we have no doubt they’re up to this challenge so the rest of the world, New Jersey included, can continue to look to the Dutch as the paragon of bicycling that it has become.