I really love riding transit, but there are moments that try to test that love…. On a recent train ride on NJ Transit I noticed a man taking over three seats while taking a nap and also a cup travelling unattended and taking over the middle seat. Apparently the cup had some “baggage” too but was completely unaware of how to store it and just threw it on the ground. Very unpleasant behavior for public transit if you ask me…. 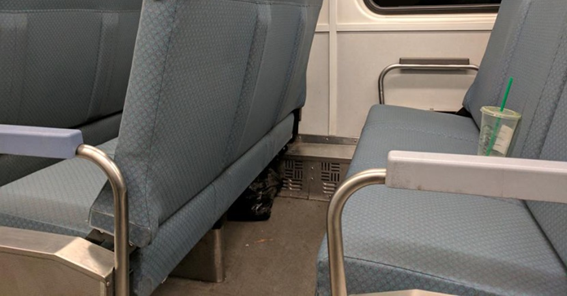 The cups and their “baggage”, people taking over more than one seat,  along with the “travelling DJ, foot loose, coastline clipper, potty mouth, and excess baggage” are  behaviors that transit agencies are looking to curb by investing in awareness campaigns. NJ Transit ran the “Greetings from the Rude Zone” campaign in 2015, SEPTA  ran the “Dude, It’s Rude” courtesy campaign, and this month Denver Transit launched the “Don’t be Jimmy” campaign, with a cartoon character, Jimmy, who is behaving in the above described manner.

The message is pretty clear and we should take notice if we want to have a pleasant ride, have clean trains, and be courteous to one another. We should all try to do the following:

These are just a few of the common complaints commuters have.  Let us know if there any others that you think should be added to the list!

We hope these awareness campaigns are making a difference in your daily commute.   Let’s face it, whether you’re on a bus or rail, walking on the sidewalk or riding on a trail…dude, it’s just not nice to be rude!