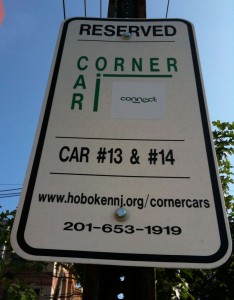 The car-free life is getting easier and easier, if you happen to live in Hoboken. The city is aggressively encouraging residents to live a greener and less gridlocked life with a wide range of programs, including its Corner Cars car sharing program, a Zipcar car sharing program, its Surrender Your Permit program, its The Hop bus shuttle system, and its ongoing initiatives to increase bicycle parking and generally improve the bicycling and walking environment through Complete Streets and safety initiatives.

In June 2010, the city launched the Corner Cars program, the nation’s first city-wide car sharing program. Residents pay $25 to join, but they get a $75 credit which can be applied to reserving cars on a per-hour basis. The program, created by the city’s director of parking and transportation, Ian Sacs, already has over 200 members and almost 50 cars (two-seater Smart Cars are the cheapest at $5 an hour). It is based on the rent-by-the-hour model that companies like Zipcar and Hertz have been offering for years. In other cities, however, those cars are stored deep in parking garages or clustered in a few neighborhoods. Hoboken’s Corner Cars are parked on the city’s streets, in special bright green spots that appear every few blocks. The city estimates that 90 percent of Hoboken residents live within a five-minute walk of a car share. The hope is that the program will reduce car-ownership rates, reduce traffic, reduce double-parking, and could provide a model for car-sharing throughout the country. In order to understand the impact of the program on car use in the city, the terms of Hoboken’s contract with the car-sharing provider, Hertz, require the company to conduct surveys of its membership to determine how their travel behavior changes. The city is also tracking the movement of car-sharing memberships and residential parking permits to independently assess how much the program affects car ownership.

Even before the Corner Cars program, car-sharing already had a history in Hoboken: the ZipCar service made its New Jersey debut in Hoboken. Researchers have found that 17.6 households gave up a car for each ZipCar on Hoboken’s streets. The city currently has 23 ZipCars in municipal garages, and many more in private garages and lots around the city. Many residents are members of both ZipCar and Corner Cars.

Besides reducing car ownership rates, car-sharing promises other benefits to Hoboken. First, the city has figured out a way to use the car-share parking sites to promote pedestrian safety. Although New Jersey state law forbids parking too close to an intersection, in the Hoboken parking crunch, drivers regularly encroach on that safety zone. The Corner Car sharing parking spots occupy the two spaces closest to the intersection, which keeps cars back.

Fiscally, car-sharing is a net gain for Hoboken. Hertz is paying the city $100 per month for each space, for a total of around $50,000. Because car-sharing is only being placed on residential streets, no meter revenue is lost. (The revenue from residential parking permits is only $15 per year.) The city has also worked out an agreement with Hertz to schedule car maintenance for the same time as street cleaning. If the car doesn’t get moved and the area around it becomes dirty, the company is on the hook for cleaning it. The company is also responsible for clearing their cars out from large snowstorms.

It is hoped that the program will eventually have between 300 and 500 shared cars. In a city with about 17,000 residential parking permits, that could put a big dent in car ownership.

To complement its car sharing initiatives, the city is taking a direct approach to getting people to give up their cars. If you give up your parking permit through its “Surrender Your Permit” program, and with it your car, Hoboken will give you rewards worth more than $500. The rewards package includes a membership and driving credits for the Corner Cars program, a free pass for the Hoboken shuttle bus called The Hop, bike gear like a helmet and lights, rental car discounts, bike commuter training sessions, coupons for athletic gear, and more. Most of the freebies were donated to the city, but the lost revenue from the shuttle pass comes out of the city’s budget.

The city, which recently renamed its Parking Utility to the Transportation & Parking Utility, has more initiatives in the works, including further improvements to the city’s bike and pedestrian infrastructure and an expansion of the shuttle system. Hoboken is working hard to make the connection between transportation and parking, and to address them in an integrated way. The city has realized that the way to address the parking crunch is not to simply build more parking, but to reduce demand for parking by offering other options – car sharing, walking, cycling, and mass transit. Other New Jersey municipalities could learn a lesson or two from Hoboken.