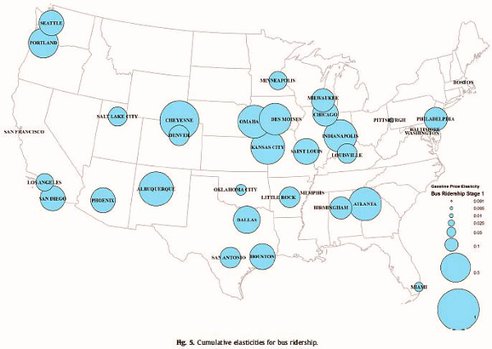 Do you think that the fluctuations in gas prices affect the way people drive? Or do you think Americans would stick in their beloved cars, no matter what?

A new American study by Bradley Lane of the University of Texas at El Paso contradicts the oft-cited notion that people will remain in their cars regardless of the cost to do so. The study found that even in cities and towns with poor transit, there is still a fairly strong link between changes in gas prices and shifts in transit ridership. Every 10 percent increase in fuel costs led to an increase in bus ridership of up to 4 percent, and a spike in rail travel of up to 8 percent.

As noted in the Atlantic, most surprising was the reaction by drivers in very auto-dependent areas (such as Omaha, Des Moines, Kansas City, and Indianapolis). The study found “big behavioral responses” to gas price changes in those areas. “What that tells me is that there is actually a greater sensitivity to fluctuation of gasoline costs in cities that tend to be more auto-dependent,” says Lane.

“We typically associate high automobile use in the U.S. with Americans’ need to drive and love to drive. But ultimately there’s a pricing and policy structure that enforces that,” he said, “If we fully costed out some of the impacts on driving and had any inhibitions on car use — not to the level of inhibitions on public transit now; I’d never wish that on anybody — but simply had some way to make automobile travel more difficult and more expensive, and gave an alternative in the form of public transit or denser neighborhoods or shorter multimodal trips, then you could really see a pretty large change.”

What do you think, On the Move readers? What would it take to get you out of your car and on to a bus, train, shuttle, or vanpool? Or on a bike, or your feet? We’d love to hear from you.