Noticing more two-wheeled vehicles out there lately? That’s because people of all stripes are increasingly hopping on their bikes to get around. Bike use has gone up 39 percent nationally since 2001, according to the League of American Bicyclists. In the seventy largest US cities, commuter bike use is up 63 percent.

Some additional interesting related data can be found in “Analysis of Bicycling Trends and Policies in Large North American Cities,” a relatively new report out by the University Transportation Research Center, authored by John Pucher at Rutgers and Ralph Bueler at Virginia Tech. Two points of interest: 1) white people remain somewhat overrepresented; but 2) bicycling appears to be trending toward racial parity. As of 2009, roughly 21 percent of all bike trips in the U.S. were made by people of color, and it looks as though U.S. cyclists may soon look pretty similar to the nation as a whole.

As noted in The Nation last month, bicyclists are an increasingly diverse group:

It’s certainly true that many of the bikers pedaling around the hipper city precincts appear to be of the bourgeois-bohemian persuasion. But take a look across the country and bicyclists are a diverse lot, including immigrants who lack the documentation to get a driver’s license and people who are too poor to own a car. These are disproportionately minorities. According to a 2006 report by the Brookings Institution and the University of California, Berkeley, 19 percent of blacks live in households without a car, compared with 13.7 percent of Hispanics and 4.6 percent of whites.

By income, here’s how the breakdown looks: 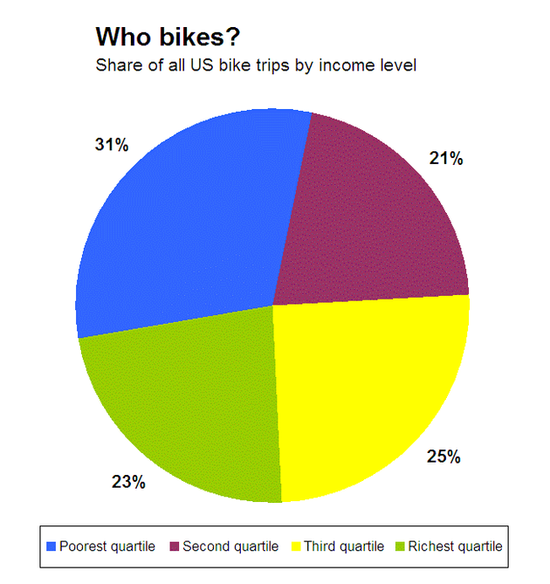